The Jewish Community Centers of Chicago are putting out a call: check your basements, attics and garages. You might find some hope there.

From April through September of 2023, JCC (Jewish Community Centers) Chicago will bring a private collection of more than 70 lovingly restored violins, violas and cellos played by Jewish musicians before and during the Holocaust to the Chicagoland area and around Illinois through cultural exhibitions, performances and community education. It’s part of the Violins of Hope initiative, founded by Israeli father and son violin-makers Amnon and Avshalom Weinstein, who have spent the last two decades collecting and repairing 70 Holocaust-era violins and other stringed instruments from around the world.

The instruments have traveled the globe, including to Rome, Tel Aviv, Berlin, London, Washington D.C. and San Francisco.

“Our young people are very far removed from the Holocaust. We know our survivor numbers are growing smaller. And even though the state of Illinois was the first to mandate Holocaust education, only 21 states do. It’s reduced in many cases to a few pages in a textbook as part of the genocide unit and some questions on the final exam,” Addie Goodman’s, CEO and president of JCC Chicago, told JNS.

“What Violins of Hope aims to do is to really provide a new avenue for Holocaust education, particularly for students, that brings the humanity and human story of the Holocaust to the forefront, and really helps people understand the atrocity that happened so that we can build on those themes of tolerance, understanding, acceptance, resiliency and hope,” Goodman said. 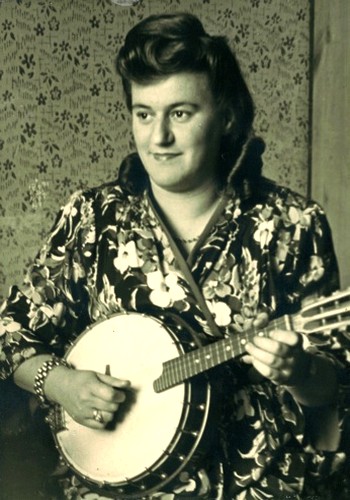 Masha Piotrkowska pose with the mandolin-banjo she got in Bergen-Belsen. Photo courtesy of Gail Levin and Ken Rapoport.

Siblings Gail Levin and Ken Rapoport of Lincolnwood, Illinois, found their late mother’s mandolin-banjo in a basement playroom. A picture of Masha Piotrkowska playing the instrument was featured in their home, but it was only after her death that they learned she played in the all-female orchestra at Auschwitz—known as Mädchenorchester von Auschwitz—conducted by famed Austrian violinist Alma Rosé, and later at parties where survivors of the Holocaust got together to try to find missing family members.

“She played for her life, playing for the Nazis after they would do their death runs and then for the Jewish prisoners who were being marched to the gas chambers,” Rapoport told JNS, who said his mother was moved to Bergen-Belsen following the liquidation of Auschwitz. She survived typhoid fever in the starvation camp and witnessed its liberation.

“The Jews were basically given the Nazi facilities to live in, and they formed a community after the war. And my mother was part of the orchestra formed in Bergen-Belsen when it became a displaced persons camp,” said Rapoport. Masha received a mandolin-banjo during her time at Bergen-Belsen. During one of her concerts, a man approached her and offered to turn pages for her while she was playing. The man would become her husband.

“When she came to America, she brought the instrument with her. She had some pictures of her playing the mandolin scattered around their house, but the mandolin was put in a storage room in our basement and we never thought much of it,” said Rapoport.

Masha played other mandolins in Holocaust survivor groups throughout the decades, and sometimes in weddings and bar mitzvahs, becoming known among her friends as a performer, playing American music, Israeli and European music.

“She played in a very Eastern European style. We have some clips of that. We took some cassette tapes and converted them to mp3, so I have some of her music,” said Rapoport.

Her story became better known through her inclusion in a book written about the orchestra. “She was a self-taught, self-accomplished player. She wasn’t by any means a professional. But she would get lost in her music, especially the Jewish music that would bring her back to her past.”

Following their mother’s passing in 2009, Rapoport and his sister started to clear out the house and ran across the mandolin-banjo. It dawned on them that it was the same instrument as in the pictures they had seen, which they knew were taken in the DP camps after the war. Realizing they were in possession of a Holocaust relic, they reached out to the Illinois Holocaust Museum and Education Center in Skokie and ended up donating the piece, which was put on display after some restoration work.

Now that mandolin-banjo will be on display as part of the Violins of Hope project coming to Chicago in April. In many host communities, the instruments are brought in for a two-week period, with four or five on display. The massive six-month undertaking in Chicago will include the display of the majority of the 70 instruments curated by Violins of Hope.

“We have a huge slate of growing partners, and there will be exhibits, performances, concerts, educational programs. The calendar is filling up more and more every day,” said Goodman.

She said the aim is twofold. The first is to deploy the violins as an educational tool throughout the metropolitan area and state. The secondary aspiration is to create a free interactive website where students, teachers, youth groups and families can learn about each violin’s story, but also be able to virtually play each violin, in a style similar to the GarageBand game.

Goodman hails the community’s reaction to the initiative, saying it’s brought new donors and community partners. The Illinois Holocaust Museum and Education Center will provide training for project volunteers and an opening night concert is scheduled at North Shore Congregation Israel in Glencoe. Additional performances are slated, including by the Illinois Philharmonic Orchestra. Exhibits at synagogues, libraries, colleges and museums are scheduled as well.

“And that’s just the first few weeks. People are eager to get involved and pretty much everybody we ask to host a concert, program or educational experience says yes,” said Goodman, who is urging family members of Holocaust survivors to search their storage spaces, where, like Rapoport, other families discovered many of the showcased instruments.

“She was very proud of her accomplishments,” he said. “Her music was the one thing my mother wanted to be remembered by. So we’re trying to perpetuate her memory, even all these years after she’s gone, to celebrate what she did.”