Is Tevye returning to Europe? Yiddish ‘Fiddler on the Roof’ hopes to head to Germany

The star of the Yiddish-language “Fiddler on the Roof” production thought it would be no more than a summer curiosity. But after a two-year hiatus induced by the coronavirus pandemic, the award-winning play is returning with a potential world tour in the works. “There is something about the Yiddish—just the sound of Yiddish on its […] 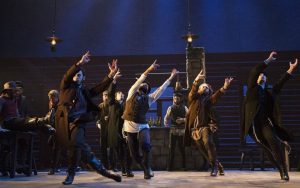 The musical history of a Jewish family set in a shtetl was a risky gamble when it premiered on Broadway more than half a century ago. But, after initial criticism, “The Fiddler on the Roof” would continue to capture the hearts of audiences, and would be the first musical that would exceed 3,000 performances in […]