Is Tevye returning to Europe? Yiddish ‘Fiddler on the Roof’ hopes to head to Germany

The star of the Yiddish-language “Fiddler on the Roof” production thought it would be no more than a summer curiosity. But after a two-year hiatus induced by the coronavirus pandemic, the award-winning play is returning with a potential world tour in the works.

“There is something about the Yiddish—just the sound of Yiddish on its own. I think it was funnier and more moving,” Steven Skybell, who returns as Tevye in the National Yiddish Theatre Folksbiene production, told JNS. “But the thing that people respond to is this symbiosis, bringing the Sholem Aleichem creation back to the language that it was conceived in. Yiddish is unique in that it carries so much—and I mean this in the best possible way—baggage with it. There’s just something undeniable about it.”

Director Joel Grey is also coming back for a limited engagement run from Nov. 13 through Jan. 1 at New York’s New World Stages. The play follows the life of dairyman Tevye and his family in Anatevka, a fictional shtetl outside Kyiv, until the anti-Semitic czar kicks then out. Current global affairs are not lost on Skybell.

“Odessa is mentioned [in ‘Fiddler’] and Kyiv is mentioned, and so that is the landscape of our story. And the message is that there is a better way than just intolerance, pushing people around and throwing them out. And I feel that that’s still such a vital message 52 years after ‘Fiddler on the Roof’ was written. It still is more than just fluff entertainment; it really goes to some deep issues,” he said. “People can come and see our show and reflect on that, and hopefully, find a way to process it for themselves.”

The return of the Yiddish version of ‘Fiddler’ comes at a time of resurgent interest in Yiddish, with increased cultural events, Yiddish courses and scholarly activity surrounding a supposedly dead language. Zalmen Mlotek, the artistic director of the National Yiddish Theatre Folksbiene, said it’s borne of a natural curiosity. 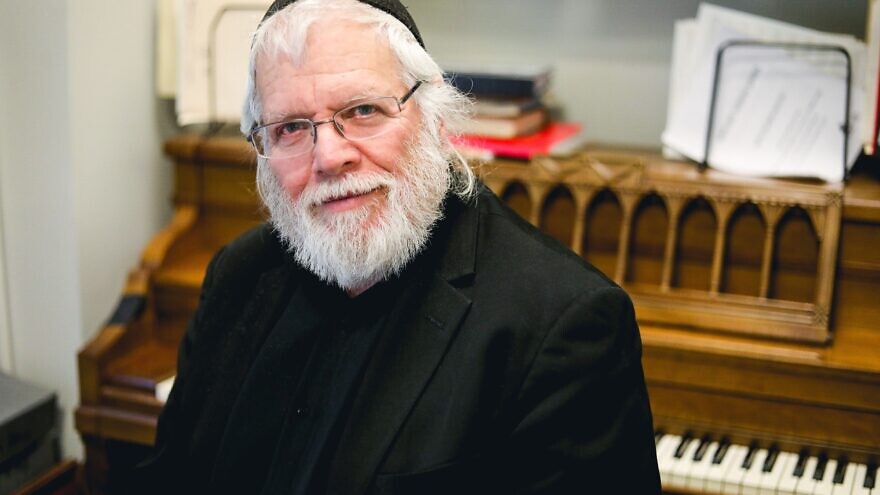 “There’s no question that part of our audience didn’t teach Yiddish to their kids because they didn’t want the kids to understand this [feeling] of leaving. The newer generation is looking at this language that I sort of heard my grandparents or uncle speaking once in a while. So, all of that interest among young people is happening all over the world. Whether people understand it at all, we believe it’s the sound of the Yiddish that is so compelling and that goes so close to the heart,” Mlotek told JNS.

The new run of the play will again include supertitles for audience members not fluent in Yiddish.

“Everybody understood every word, every moment [with the supertitles]. But many people—Jews and non-Jews—said they stopped looking at the supertitles because they were so transfixed with the performance itself. They knew the story; they knew the music,” said Mlotek.

The pre-COVID tour of the Yiddish “Fiddler” was supposed to take the production to three Chinese cities, along with a six-week run at the Sydney Opera House and another six weeks in Melbourne prior to stops in Boston, Washington and Miami as part of a U.S. leg. Mlotek said that producers and theater presenters from around the world who attended the original run were eager to bring the production to their own countries.

“They went back and said we must do this. We’re hoping that in these seven weeks, we can do the same—invite people from all over and have that same kind of reaction,” said Mlotek.

That includes a potential run in Germany, which has seen its own unlikely revival of Yiddish. In fact, famed opera director Barrie Kosky, based at the Komische Oper Berlin, engaged Skybell to play Tevye in Kosky’s Fiddler production in Chicago early next year.

“If Barrie Koski believes Steven’s Tevye should be seen by American audiences, we want to believe that German audiences should see it as well,” said Mlotek. “One of the places that we would so much love to present this is Germany. There are Yiddish festivals going on in [the cities of] Weimar, Berlin … and we feel that the audience not only would understand it for the most part, but would so appreciate seeing and hearing this particular version.”

And as for taking the production back to its birthplace, Skybell noted that there are no firm plans in the works, but that doesn’t stop him from thinking about it.

“I’ve said all along to myself that if there ever were a show that could tour anywhere, it’s something in Yiddish because there are Yiddish speakers all over the globe,” said Skybell. “Taking it to Ukraine would be undeniably a great honor.”