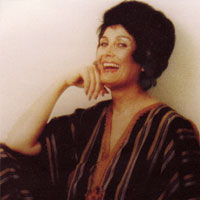 In Israel she is known simply as “Yaffa.” Her songs have exhilirated the nation from its very inception – especially in times of war. She was nicknamed “the singer of the wars” and for many Israelis Yaffa became the apotheosis of patriotism

Singer Yaffa Yarkoni was born in Eretz, Israel more than two decades before the realization of a Jewish state. She began her career in a coffee house owned by her mother. Yaffa served as a radio operator in Israel’s War of Independence in 1948 and became popular singing the songs adopted as anthems by the Palmach, the Jewish underground militia that fought the British and the Palestinians in the pre-state days.

In 1967, after Israel captured Jerusalem’s Old City, it was Yaffa who sang Jerusalem of Gold in front of the Western Wall, Judaism’s holiest site – an event that remains indelibly etched into the minds of an entire nation. And on Israel’s 50th Independence Day, in 1998, she was awarded the prestigious Israel Prize for her contribution to the nation’s music.

In Israel Yom Hatzmaut, or Independence Day, falls on 5 Iyar. The day before is Yom Hazikaron or Remembrance Day – the equivalent of Memorial Day in the U.S.A. (In 2002 these would fall on 16 and 17 April). For each of the past 54 Memorial Days Yaffa has been onstage, singing patriotic songs to honor the fallen soldiers of Israel. For Yaffa, even at age 76, Yom Hazikaron 2002 promised to be more of the same. There was to be a performance in Kfar Yona and then she would appear at her granddaughter’s school in Givatayim. And just two weeks later a gala tribute in Yaffa’s honor was due to take place – an evening almost two years in the making

In the United States following the tragedy of the World Trade Center, comedian Bill Maher, host of Politically Incorrect, made comments that nearly cost him his job. The U.S. administration, rather than defend Maher’s right of free speech, actually responded by saying all Americans need to watch what they say and do. Yaffa Yarkoni found that Israel and the United States have this much in common.

A couple of days before the Independence/Remembrance Day celebrations, Yaffa was interviewed on Israeli Army Radio. But rather than the expected exhortation to the troops, Yaffa Yarkoni – the singer of the wars – dissented. Having seen video and pictures from the Israeli incursions into Jenin, Bethlehem, and Ramallah Yaffa had this to say:

When I saw the Palestinians with their hands tied behind their backs, young men, I said, ‘It is like what they did to us in the Holocaust.’ We are a people that lived through the Holocaust. How can we be capable of such things?

Yaffa went on to say she understood why some Israeli reserve soldiers refused to serve in the West Bank and Gaza, and revealed that one of her sons-in-law is among them. She also said if the situation in Israel continued to deteriorate she would seriously consider sending her grandchildren to live abroad.

The firestorm that followed her words was fast and merciless. Callers deluged talk radio shows, editorials condemned her, government ministers denounced her. Yaffa’s words were deemed so offensive that the union representing the nation’s performing artists called off the planned tribute. The town of Kfar Yona canceled her Memorial Day performance. Youth movements declared a boycott of her music. She received so many hate calls and faxes that she was too frightened to appear in public.

Orit Shohat, Yaffa’s daughter, said the family is disappointed that so few Israeli artists have risen to her mother’s defense. One of her defenders is Gidi Gov, a well-known pop singer. Gov announced that he was quitting the Israeli Union of Performing Artists, the group that canceled its evening of tribute to Yaffa. But few others have spoken out publicly in her support.

Yaffa Yarkoni has recorded more than 60 record albums in numerous languages including Hebrew, French, English, and Spanish. She has toured the world several times.