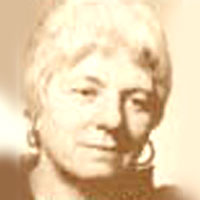 Ms. Rubin sang the Yiddish folksongs, often unaccompanied. She made documentary recordings such as “The Old Country” on Folkways Records, with other folksingers such as Pete Seeger included in the project.

In a documentary about her life and work, “A Life of Song: A Portrait of Ruth Rubin” by Cindy Marshall, Ruth Rubin states that her parents moved to Montreal in 1904 and she was born there in 1906 as Rifkele Royzenblatt.

She was born on Sept. 1, 1906. (Mark Slobin, in his new introduction to “Voices of a People” lists her as being born in Khotin, Romania.) At age 5, her father died.

She attended The Aberdeen School, a Montreal Protestant school, and in the afternoons, a Jewish secular “shule”, the Peretz Shule,– getting an immersion in Jewish Yiddish culture.

At age seven she appeared on stage for the first time at the Monument National Theatre in Montreal as part of her school’s annual concert.

At 18, she moved to New York City. Inspired since meeting Shalom Aleichem in 1915, Ruth produced a book of “modern” Yiddish poetry called “Lider” in 1927 under her maiden name Rifka Royzenblatt.

She married Sam Rubin in 1932 and had one son, Michael. She credits her mother, whose her vast knowledge of Yiddish song was extensively tapped, as one of her early informants of Yiddish song.

Her collections show her view that Jewish folk songs are sources of Jewish history and literature. By 1950 she produced her first popular anthology, “A Treasury of Yiddish Folksong.

” Her book “Voices of a People: The Story of Yiddish FolkSong” appeared originally in 1963, and was recently republished in 2000 in a new edition by University of Illinois Press.

She continued gathering music from informants until very late in life. She received financial support in 1983 to help her organize her extensive recordings and materials.

Her materials are now kept in several archives including in Tel-Aviv at AMLI (Americans for Libraries in Israel), at YIVO in New York, and at the Library of Congress.