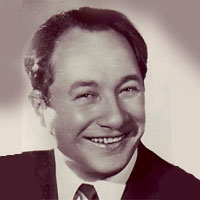 Sidor Belarsky, master singer of the Jewish people, was born Isidor Livshitz in Kryzhopol, Ukraine, 1898. He graduated from the State Conservatory in Leningrad, and soon became a leading basso at the Leningrad State Opera Company. In his song recitals from coast to coast and as a soloist with eminent conductors such as Arturo Toscanini, Fritz Busch, Arturo Rodzinksi, his success was overwhelming. In opera, as well, Sidor Belarsky, was triumphantly received. He was leading basso of The Chicago Civic Opera Company, the San Francisco Opera Company, The American Opera Company Of Los Angeles, the New York City Center Company, Teatro Municipal in Rio De Janeiro and Teatro Colon in Buenos Aires.

One of his many concerts in Moscow was attended by a large group of American visitors, including, Dr. Franklin S. Harris, President of Brigham Young University in Provo, Utah. Dr. Harris, impressed with the power and beauty of Belarsky’s voice, asked him to join his faculty as professor of music.

On February 8, 1930, Belarsky finally arrived in New York on the Aquitania with his wife Clarunia and his only child, Isabel, age 9.

Over the years, both his recitals, in many of which he was a soloist with such eminent conductors as Arturo Toscanini, Fritz Busch, and Arturo Rodzinski, and his operatic roles, were critically acclaimed in North America and around the world. Belarsky was leading basso of the Chicago Civic Opera Company, the San Francisco Opera Company, the American Opera Company of Los Angeles, the New York City Center Company, Teatro Municipal in Rio de Janeiro and Teatro Colon in Buenos Aires. Much loved by audiences, he gave over 22 solo concerts at Carnegie Hall between 1931 and 1961. During the 1930s, Belarsky was invited to sing for a large Jewish Organization; the guest speaker happened to be Albert Einstein. After hearing him, Einstein remarked that he would never give another speech unless Sidor Belarsky was on the program. The concert had been sponsored by Chaim Greenberg, noted educator and editor of the Jewish Frontier magazine. After hearing Belarsky, he sent a telegram to the Labor Zionist Organization in New York City, saying that they had to invite this talented singer who had arrived from Russia just a few years earlier, to be on their own programs. This serendipitous meeting was the beginning of Sidor Belarsky’s career in Jewish music. Ultimately, he came to be a pre-eminent collector, disseminator and interpreter of classic cantorial music, Chassidic nigunim, Yiddish folk songs and Hebrew songs from Israel.

Belarsky’s popularity among Jewish communities was such that his concerts were in demand around the globe. Jews all over the world felt an instant connection to his music, and his recordings were sold in every Jewish bookstore. In addition to his numerous tours, he devoted much of his time to teaching music at the Jewish Teachers Seminary-Herzlia Institute in New York City. During this period he was invited to visit Israel as the personal guest of President Zalman Shazar; his concert in 1948 celebrated the birth of the State. In 1951 he traveled there again to make the documentary film, “Shalom Israel,” under the auspices of Histadrut, Israel’s pioneering labor organization, Sidor Belarsky’s music was and remains a light to the Diaspora, as it kindled and helped preserve memories of home, particularly after the Holocaust.

A Concert of Jewish Music

Once Upon A Time