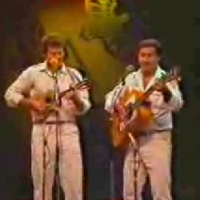 The grand-daddy of all the duos, with a career spanning more than 45 years! Yossi Hurie and Nisim Menachem met at a party in Tel Aviv sometime in 1960. They both had their guitars with them, were jamming together, and realized there was a special chemistry between them. That was the beginning of the unique character of the PARVARIM, a special sound made of a fantastic harmony supported by superb guitar playing.

To list all their songs would take far too much time, suffice to say that a large CD collection was made available in recent years. In 1977 Nisim Menachem became religious and left the music field all together. His place was taken by Ori Harpaz, a brilliant guitar player with a distinct Latin American influence. The great Mati Caspi joined forces with the PARVARIM, contributing arrangements to some of their later songs, and the PARVARIM continue to charm us with their magic till today. We sang the following songs: “TILBESHI LAVAN”, “AHAVA PSHUTA”, “TZIPORIM NODEDOT”, “TIUL LAILI”

The Parvarim recorded an album of Hebrew cover versions of Simon and Garfunkel songs in 1971. The translations were mostly accurate, but for “Scarborough Fair,” the Hebrew words for “parsley, sage, etc.” didn’t fit into the music, so the spices were changed to “cinnamon, jasmine and myrrh.”