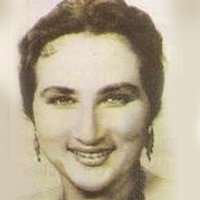 Netania Davrath was born in Ukraine, but her family emigrated to Israel in 1948. She studied in Jerusalem with Edith Boroschek, in Düsseldorf, at the Julliard School with Jennie Tourel, and in Italy.

Netania grew up with Russian and then Israeli folksong in her artistic veins. This may well account for her avoidance in this context of operatic convention which in other throats so often suffocates these green-fresh songs. There was a time when every operatic diva, actual or presumptive, of the seventies seemed to grasp a selection of the Auvergne songs and stamp their identity into and on them. While de Los Angeles, von Stade, Bayo and Gomez have their moments Davrath stands supreme in any company.

The Auvergne songs, first performed in 1924 at the Concerts Colonne in Paris, are in local dialect. Davrath, fluent in eight languages, had six months of study with a language coach to secure an authentic approach to pronunciation. The New Songs are in straightforward French. Sung texts and translations appear side by side in the Vanguard booklet.

Davrath was not the first to record these songs. She was preceded by the great Madeleine Grey and the eleven she recorded in 1930 with Elie Cohen are to be had.

Canteloube showed a very sure hand when arranging and orchestrating these gems. His skill bears comparison with Grainger’s without bring quite so oddball. Certainly when you compare Grainger’s handle on Shallow Brown and Brigg Fair with Canteloube’s dissections and reconstructions the same genius is at hand. The trick which both composers pull off while using classical apparatus is not to stifle the butterfly, birdsong, mist, escarpments, sun-dazzle, sheep calls and heat-haze of the originals. Canteloube works with an impressionistic palette, making the subtlest intensifying use of piano figures, flute, oboe and clarinet voicings. The lovely balance and touch of the instrumental gauze takes the lightest tincture from Ravel, d’Indy (Symphonie Cévennole), Roussel (Poème de la Forêt) and Bonnal. Who is Pierre de la Roche and why is the orchestra unnamed? Can anyone shed light on this?

Davrath’s voice has a lambent girlish quality which takes you to a land which has some parallels with the scenes of the novels of Marcel Pagnol (Manon des Sources). She is free from that modern and stultifying sine qua non of the ‘great’ soprano – vibrato. Her vocal production is pure but infused with warm feeling, endearment, affection, humour and sensuousness. She is elegant without gentility; folk-like, pristine and flamboyant.

She performed internationally in both opera and concert, interpreting composers from Bach to Verdi to the moderns.

She made nearly a dozen recordings for Vanguard Classics.