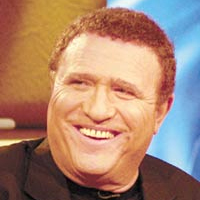 Yehoram Gaon, (born December 28, 1939) is an Israeli singer and actor. He was born in Jerusalem to a Sephardic Jewish family.

His career as a singer started when he joined the Nahal Brigade band in the IDF. He later joined the band “Yarkon Bridge Trio”, where he performed along with Arik Einstein and the late Beni Amdorsky. All three became stars in the Israeli popular culture.

Gaon’s recognition also caused many Israeli composers and song writers to personally ask him to perform their songs. He is the most known singer of Naomi Shemer’s Od Lo Ahavti Dai (lit. I have not Loved Enough Yet). Additionally, Gaon performed at the Nobel Prize ceremony of Yitzhak Rabin, Shimon Peres and Yasser Arafat.

As an actor, Gaon started his career by starring in the musical film Kazablan. There he performed the songs Kol HaKavod (lit. all the honor), and Yesh Makom (lit. There is a Place), which are associated with him to this day.

Following the film’s success, Gaon became an overnight sensation and was offered parts in other films. His most notable starring role was in the Israeli film Mivtza Yonatan (English: Operation Thunderbolt) (1977), where he played Yonatan Netanyahu. He also starred in his own autobiography feature, called Ani Yerushalmi (lit. I’m a Jerusalemite) (1971). Yehoram Gaon also starred in several TV series, such as Krovim Krovim (1983), an Israeli sitcom.

He hosted the Israel Broadcasting Authority documentary series for the Jubilee Year, entitled, T’kuma. In 1998 he resigned from the show, claiming it glorified Arab terrorists.

Yehoram Gaon had his own TV show called Shishi BeGaon (“Friday with Gaon”) on Israeli Channel One. The show ran for many years and was very successful in Israel. Currently Gaon then hosted a weekend talk show on commercial Channel 2.

In addition to his work in performing arts, Gaon has recently entered the political arena. In 1993 he was elected to the Jerusalem City Council and has worked extensively for the city, primarily in the area of cultural and municipal arts. He has indicated that he may well be interested in pursuing a political career, but retains his interest in promoting Israel, together with its popular and folk music.

He was the recipient of the Israel Prize in 2004.