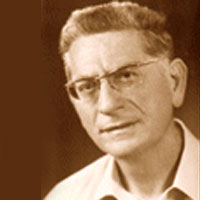 Mordekhai Seder was born in 1916 in Novorossiysk, Russia. In 1926 he immigrated to Eretz Israel where he continued his piano studies. In 1932 he went to Paris to further his musical education, where amongst his teachers were Paul Dukas and Nadia Boulanger and where he received occasional lessons from Stravinsky. He returned to Israel in 1937and then, in the years that followed, his personal style was formed: Elements of modern western music with strong influence of Jewish liturgical music and especially music of oriental Jewry, as well as Jewish Sephardic folklore.

The body of Seder’s work can be divided into three main periods. The first in which he wrote choral music drawn from the A.Z.Idelsohn’s Thesaurus of Hebrew-Oriental Melodies as well as from his own collected material of liturgical chants of oriental Jewish communities, using contrapuntal techniques generally found in western vocal music of the Renaissance as in the SABBATH CANTATA. His second period contains mainly instrumental music based on folkloric motifs as in the PARTITA for solo violin and the RICERCAR for strings, leading to his third period which consists largely of instrumental music based on diatonic modi of his own of twelve or more tones.

Amongst his other important works are the oratorio MIDNIGHT VIGIL, music for the ballet JUDITH commissioned by Martha Graham, JEPHTHAH’S DAUGHTER for the Bat Sheva Dance Company and the symphony JERUSALEM for choir and strings.