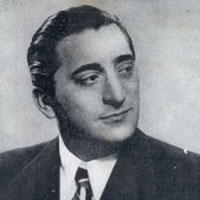 The Jewish American tenor, Jan Peerce whose birth name was Jacob Pincus Perelmuth, was born June 3, 1904 in New York, NY and grew up in the New York City streets, and attended De Witt Clinton High School and Columbia University. He took violin lessons, and gave public performances; sometimes he also sang and it was soon discovered he was an exceptional lyric tenor.

In 1932 he was hired as a tenor soloist with the Radio City Music Hall company. Thanks to its radio broadcasts and stage programs, Peerce soon had a nationwide following. This led to concert engagements, and then he made his operatic debut in May 1938 in Philadelphia as the Duke of Mantua in Rigoletto, followed by his first solo recital in New York in November 1939.

The legendary maestro Arturo Toscanini heard him and found him to be the tenor he had sought to sing operatic and choral works with the NBC Symphony Orchestra. The recordings made during, or following, the NBC broadcasts are among the outstanding musical legacies of our time. Toscanini was reportedly pleased with Peerce’s professionalism, as well as his extraordinary musical talents; many have said that Peerce may have been Toscanini’s “favorite tenor” during the Maestro’s 17 years at NBC.

Peerce made his debut with the Metropolitan Opera on November 29, 1941, singing Alfredo in Verdi’s La traviata. He sang also the parts of Cavaradossi in Tosca, Rodolfo in La bohème, and in Gounod’s Faust. He was hailed by the critics as the “All-American successor to the ‘greats’ of opera’s almost extinct ‘Golden Age.'” In 1946 he sang and recorded Puccini’s “Tosca” with soprano Grace Moore and baritone Lawrence Tibbett at the Met.

In 1943 he appeared in the OWI film, Hymn of the Nations, with Toscanini, the NBC Symphony Orchestra, and the Westminster Choir in a performance of Verdi’s seldom-heard choral work. Filmed in NBC Studio 8-H, the performance has been issued on video-cassette and DVD.

During the 1950’s Mr. Peerce performed regularly as a featured soloist before audiences of over 14,000 guests under the conductor Alfredo Antonini at the landmark Lewisohn Stadium in New York City. These Italian Night open air concerts featured the Philharmonic-Symphony Orchestra and the Lewisohn Stadium Orchestra along with such operatic luminaries as Richard Tucker, Robert Merrill, and Eileen Farrell.

In 1956 Peerce made a sensation in Moscow as a musical “cultural exchange” ambassador, being the first American to sing with the famed Bolshoi Opera. He remained on the roster of the Metropolitan until 1966, appearing again in 1966-1967. He also taught a master class. In 1971 he made his Broadway debut as Tevye in “Fiddler on the Roof.” He continued to make occasional appearances until his retirement in 1982, remaining in fine voice. He was the brother-in-law of fellow Jewish-American tenor Richard Tucker. Peerce was also at home on the concert stage and in solo recital.

Peerce recorded almost exclusively for RCA Victor as a “Red Seal” artist. Among his first recordings was as a featured soloist in Nathaniel Shilkret’s 1939 tribute album to Victor Herbert. That same year Peerce was the tenor soloist in Toscanini’s broadcast concert of Beethoven’s Ninth Symphony, but it would be years before the Maestro would approve one of his performances of that symphony for commercial release.

Peerce sang in Toscanini’s 1944 broadcasts of Beethoven’s Fidelio, followed by the complete performances of Verdi’s La traviata, Puccini’s La bohème, and Verdi’s Un ballo in maschera (with Herva Nelli), all eventually released on LP and CD. (Peerce did not sing in Toscanini’s broadcasts of Verdi’s Otello, Aida, or Falstaff.) He also sang in the Madison Square Garden concert in 1944, which featured the final act of Rigoletto with Toscanini conducting the combined New York Philharmonic and NBC Symphony Orchestra; this performance was recorded and also released on LP and CD. In 1952, he participated in Toscanini’s last performance of Beethoven’s Ninth Symphony, which the Maestro finally allowed to be released commercially on the RCA Victor label. His best-selling recording, however, was of a popular song, The Bluebird of Happiness.

He made several stereophonic recordings in the 1950s and 1960s for RCA, then gradually curtailed his recording projects. Most of his major recordings have been released on CD.[13]

For Columbia Masterworks Records, Peerce sang the title role in a 1963 recording of selections from Sigmund Romberg’s The Student Prince, opposite Roberta Peters, and also featuring Giorgio Tozzi. This has not yet been released on CD.