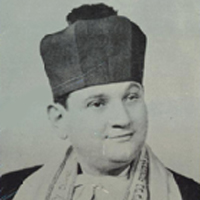 Sholom Katz was born in Grosswardein, Hungary. At an early age he was already displaying his unique ability before vast audiences. When he was only twenty years old, he won the post of cantor at the famed Kishinever Shul, with a three year contract. His next position was in the Hecker Shul where the renowned Shlomoh Zalmon Razomne once officiated as Cantor. In 1942 in a Nazi concentration camp, Sholom was among 1600 Jews scheduled for mass execution. He received permission to sing the Keil Molei Rachamim (Prayer for the Dead) while the prisoners were digging their graves. The Nazi commandant, impressed with his voice, spared him to sing for the officers, and the next day he was allowed to escape, the only one of 1600 spared a brutal death.

Sholom Katz’ phenomenal vocal range, his perfect control and dramatic quality are well displayed in his moving rendition of the Sabbath Services. Several years ago he was elected “The Outstanding Cantor of the Year” by the World. Committee for the Furtherance of Jewish Education.