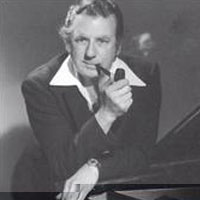 As of 2002, Irving Fields was one of the last of his generation of active musicians; trained in the prime years of Tin Pan Alley and classic American popular music before World War II, he could be found still playing piano regularly in New York in the second year of the new century. Born in 1915, Fields grew up on the Lower East Side of Manhattan and, after a stint as a child actor in Yiddish theater, became part of the generation that followed New Yorkers like Bert Kalmar, Harry Ruby, George Gershwin, and their contemporaries into music. At age 15, he won first prize playing piano on Fred Allen’s Amateur Hour radio, which got him 50 dollars cash and a week playing at the Roxy Theater. From there, he went on to engagements at other venues and studied at the Eastman School of Music and the Masters Institute in Manhattan, and made appearances as a piano soloist with the Boston Pops as well as leading his own group that got to Carnegie Hall. He also began writing songs, among them “Miami Beach Rhumba,” which became a hit for Xavier Cugat. He also wrote “Chantez, Chantez,” which was covered by Dinah Shore; “Managua, Nicaragua,” recorded by Guy Lombardo, Emdundo Ros, and Freddy Martin; “The Door Is Open,” recorded by Sarah Vaughan; and “Night After Night” and “Miami Beach Cha Cha Cha,” among others.

As of 2002, Fields was playing at Harry’s Bar in the Park Lane Hotel in New York at the age of 87, but over the years, amid the songwriting and concertizing, he’s also entertained on cruise ships, private parties for movie stars and real estate moguls, numerous other venues, and at children’s concerts (where one of the highlights is an original song, “Who Put the Banana in the Piano”).

Fields also found time to record albums during the late ’50s and early ’60s, including The Fabulous Fingers of Irving Fields for Fiesta, Irving Fields Plays Irving Berlin in Fabulous Hi-Fi for Tops Records, Irving Fields at the Latin Quarter for 20th Century-Fox, and Broadway Hits in Hi-Fi and At the St. Moritz for ABC Paramount. His most famous body of work, however, was the “…and bongos” instrumental series that he recorded for Decca Records during the height of the hi-fi/stereo boom of the late ’50s: Bagels and Bongos, a Latin/Jewish hybrid that caught on in a serious way; followed by Pizzas and Bongos, Champagne and Bongos, Bikinis and Bongos, and More Bagels and Bongos, and all rounded out by Irving Fields and His Trio at the Emerald Room. Thanks to the late ’90s surge of interest in late ’50s instrumental dance music (i.e. “bachelor’s den” compilations etc.), Fields — who was born in the heyday of the 78 rpm disc and acoustical recording — has found his work as a performer and composer returning to availability on compact disc. ~