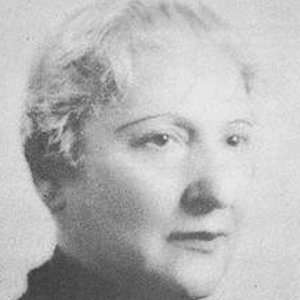 Born in Bessarabia, Romania in 1885, Greenblatt settled in Philadelphia in 1900, where she worked in the garment industry. In 1900, she married fellow immigrant Isidore Greenblatt; the couple’s daughter Marjorie later married Woody Guthrie. While raising her five children, Greenblatt also became active in Zionist causes. After the 1917 Balfour Declaration, she founded the Atlantic City branch of the Zionist Organization of America; later she was active in Hadassah and the Jewish National Fund. She also served as national president of Pioneer Women (now Na’amat).

Between 1935 and 1966, Greenblatt published five volumes of Yiddish poetry and an autobiography, Baym Fentster fun a Lebn [At the Window of a Life]. She died in New York in 1975. Although European Yiddish culture was all but destroyed by the Second World War, Greenblatt’s work was widely published during her lifetime in Yiddish newspapers across the United States and in Israel.

In her later years, Greenblatt lived across the street from the Guthries in the heart of Brooklyn’s Jewish community. In an attempt to make peace with Isidore, who was unhappy that Marjorie had married a non-Jew, Woody Guthrie began studying Judaism and sent his son Arlo to a Hebrew tutor. Arlo later set some of Greenblatt’s works to music. These, along with Jewish-themed songs written by Woody Guthrie, were performed for the first time by the Klezmatics in a December 20, 2003, performance at New York City’s 92nd Street Y entitled “Holy Ground: The Jewish Songs of Woody Guthrie.” The songs were released on a CD, Happy Joyous Hanukkah, the following year.