History and Origins of Sephardic Music

History and Origins of Sephardic Music 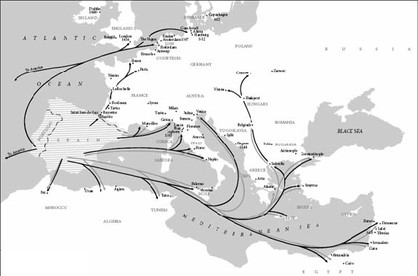 Map of Sephardi Immigration from Spain

It is impossible to identify how similar Moroccan Sephardic music is to the pre-expulsion music of the Jewish population in Spain. None of the music in medieval Spain was recorded, so no record remains of their music. There are significant indications that the Jews in Spain did have a thriving musical tradition, however. Therefore, the Sephardic music of Morocco developed almost exclusively in Morocco, and as such, is stylistically different from the Eastern Sephardic tradition.

The texts of Sephardic music date occasionally from the pre-explusion. Many scholars point to identical texts found in both the Eastern and Western traditions as evidence of this. However, most Sephardic texts were written after the expulsion; they were either acquired from the Iberian peninsula through travel or trade, borrowed from the traditions of the host country, or newly written.

Following their expulsion from Spain, the Jewish population in Morocco thrived for many centuries, becoming merchants, artisans, and politicians. Morocco retains a reputation as one of the most welcoming countries of the Middle East towards Jews. However, during Vichy French rule in Morocco during World War II, anti-Semitic policies were put in place, and Jews were increasingly marginalized by Arab Moroccans. This discrimination continued after the end of the war, and provoked the immigration of the majority of the Moroccan Jewish population to Israel, following its creation in 1948. In 1948, the Jewish population in Morocco measured 238,000. Today, the population is approximately 2,500.

“The worst insult that a Moroccan could possibly offer was to treat someone as a Jew…My childhood friends have remained anti-Jewish. They hide their virulent anti-Semitism by contending that the State of Israel was the creature of Western Imperialism… A whole Hitlerite myth is being cultivated among the populace. The massacres of the Jews by Hitler are exalted ecstatically. It is even credited that Hitler is not dead, but alive and well, and his arrival is awaited to deliver the Arabs from Israel.”– Said Ghallab, Moroccan Writer, 1965

Because of this mass Jewish immigration to Israel in the second half of the 20th century, the Sephardic musical tradition is a dying one in Morocco. Eastern Sephardic music remains more widely documented and practiced today. The aging Jewish population in Northern Morocco still maintains the tradition, and many recordings and studies of the music have been done by anthropologists since 1950. However, the future of Sephardic music in Morocco remains threatened.