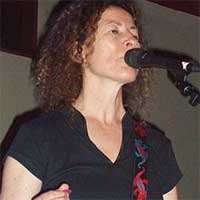 Yehudit Ravitz (born December 29, 1956) is an Israeli pop rock singer-songwriter. She was born in Be’er Sheva, in southern Israel. As of 2005, she had released 12 albums and has been performing for nearly 20 years, also musically producing several albums for other musicians.

Her music is influenced by a variety of styles, including Spanish-Latin music. Her interest in Latin music may have originated due to one side of her family being Sephardi in origin, and Ladino speakers.

Over the years, Ravitz has performed alongside various Israeli musicians, including Gidi Gov, Yoni Rechter, Matti Caspi, Ofra Haza, and Sarit Hadad. When she served in the entertainment department of the Israel Defense Force’s Battle Engineering Corps, along with Corinne Allal, who would also later become a well-known Israeli singer, Arik Einstein, Israel’s most famous pop singer of the time, discovered their talents and asked them to sing on his upcoming album.

Ravitz came to fame in 1977. She was then a member of a band (“Sheshet”), but was asked to sing a solo number at the Israeli song festival that year. She was given the song “Selichot”, a composition by Oded Lerer to the song of Israeli poet Leah Goldberg; Ravitz, only 21 years old, went on stage with simply a guitar to perform. Ravitz only reached 6th place at the festival, but her poignant performance was considered the most memorable item of the program, and the song became “Song of The Year” in 1977. Ravitz became a star of the elite quality Israeli music, performing songs by the country’s finest lyricists and composers. She is also well-known for her own poetical compositions.

Her turn to more open audiences came in 1987, when she released the album “Ba’ah Me’ahavah”, a rock piece which made her a stadium rock performer. She successfully filled the biggest venue halls in the country and since then has completely changed her image from the innocent, flower-patterned young girl of “Selichot”. Ravitz emerged as one of Israel’s biggest rock stars.

In 1992 she co-produced Israeli contratenor David D’Or’s hit song “Yad Anuga” (“Gentle Hand”, or “Tender Hand”), which was released as a 12-inch single by Big Beat Records, and reached # 3 in the most frequently played charts in Great Britain.

She still maintains her popularity. On July 3, 2008, Ravitz performed her first Caesarea Amphitheatre show in a decade to a sold-out crowd, later released on a DVD and CD. Due to high demand, additional shows were added, with tickets selling out within days.