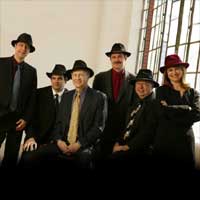 Pianist, Composer and Bandleader Joseph Vass conceived and wrote Gershwin The Klezmer and the book, music, and lyrics for Mishegass!, as well as all Klezmerica’s original music and lyrics. He is a member of the Dramatists Guild. Joe started piano lessons at 8, but he’s only played well since August, 1997. As a teenager, he did practice a fair amount in the basement of his parents’ house in Oak Park, Illinois. His piano teacher’s teacher’s teacher’s teacher’s teacher’s teacher was Ludwig Van Beethoven. He lives in Maplewood, Minnesota, with his wife comedian Susan Vass.

Woodwinds player Dale Mendenhall has over 30 years of professional music experience. As a freelance musician, Dale has performed at Orchestra Hall with the Minnesota Orchestra, The Guthrie, Ordway, Children’s Theatre, The State and Orpheum Theatre, backing up such artists as Natalie Cole, Aretha Franklin, Tony Bennett, David Letterman, Jay Leno, and many more. He toured Japan with Ben Sidran and the Paris singer Clementine. His sound was heard on the #1 pop hit “Funkytown.”

Violinist Carolyn Boulay was Concertmaster of her University of Minnesota orchestra and went on to play in the 1st violin section of the San Antonio Symphony. Returning to Minnesota to raise her family, she has been a soloist with area orchestras, played at the White House, and freelanced extensively. She has played electric fiddle for country bands at festivals, rodeos, as well as opening for artists such as Tanya Tucker and Vince Gill. She has been featured on several Target Lifescapes CD’s. Carolyn has toured and recorded with Lorie Line since 1993.

Bassist Gary Raynor traveled for years with Sammy Davis, Jr., performed with the Count Basie Band, and has played with many national jazz artists in concert and at clubs. He has played dozens of Broadway touring shows, as well as the world premiere of “The Lion King.” He performs with the Minnesota Sinfonia and has appeared with the Minnesota Orchestra Pops. His arco bass work is featured on Janet Jackson’s single “Again,” which was nominated both for a Grammy and an Academy Award. Gary teaches at the University of Minnesota, and is also the bassist for “Guy’s All-Star Shoe Band”, featured weekly on the internationally popular “Prairie Home Companion” radio program.

In Memory:
Violinist Yuri Merzhevsky was born in St. Petersburg, Russia. In 1984, he won a Prize in the International Johann Sebastian Bach Competition in Leipzig, Germany. In 1986, he received the equivalent to a Ph.D. from the Leningrad Conservatory of Music, where he subsequently served as a Professor of Violin. He has also served as Concertmaster in several orchestras, including the Leningrad Conservatory Orchestra and the Hermitage Orchestra. He has been a frequent soloist with many orchestras, including the Leningrad Philharmonic.