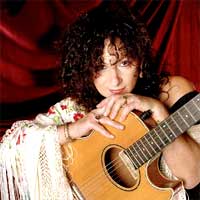 An unforgettable singer/performer whose haunting, soulful voice will linger on, long after you have been entranced and entertained . . .

Singer, guitarist, songwriter, Stefani Valadez offers a rich repertoire of soulful romantic, enchanting melodies, including songs from many nations. A third generation musician, Stefani has an international following of fans who have thrilled to her deep, haunting voice and the wide range of musical and ethnic lore she incorporates in her performances.

Stefani first learned to play guitar and discovered the beauty of harmony from her mother, a singer and pianist, and from Pete Seeger, and the Greenwich Village blues locals. She traces her musical inspiration to diverse musicians, including Taj Mahal, Grace Slick, and Antonio Jobim. Her later interest in Celtic & international folk music led her to her first CD of World Music, “Other Voices”.

One of her newest albums is “Ladino Live,” a medley of songs from the Sephardic cultures of the Mediterranean, which Stefani collected while living in Spain. They speak of a time of peace and a flowering of civilization when the cultures of the three great religions coexisted peacefully together for 700 years. Stefani’s arrangements bring these ancient melodies, prayers and love songs into the future with sensual and haunting vocals, soulful ethnic drums and delicious harmonies. The LA musicians on this CD have played with the legends of the music world and add layers of rich colors to an already deep and moving palette of music.

A strong vocalist, performer and arranger, Ms. Valadez also plays dulcimer and percussion and is a producer and recording artist.