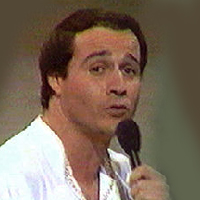 Singer-songwriter Avi Toledano was born in Morocco, and arrived in Israel at the age of 16.

In the same year he signed his first recording contract with EMI Records.

He was nominated several times by Israel radio stations as “Singer of the Year”.

Until now, he has recorded 21 records, and several of his songs were at the top of the charts many times.

Avi received the “Kinor David”, which is the Israeli equivalent of the Oscar, from the Yediot Aharonot newspaper.

His shows have taken him all over the world, with performances at Madison Square Garden in New York, the Olympia in Paris, and Tokyo’s Music Festival of Songs.

He has recorded in Japan, Spain, France, Germany and represented Israel in 1982 in England at the Eurovision Song cotest, taking second place with the song “Hora”.

A year later, he composed and produced for Ofra Haza (with lyricist Ehud Manor) the song “Chai” which also took the second place award at Eurovision.

Toledano has staged several “one-man-shows” such as “La Boheme” based on Charles Aznavour’s song “Identitiy Card” which was based on the story of his life.

He played the role of Marius in “Les Miserables”, a Macintosh production in Tel Aviv.

He sang and composed the music for an album based on Hanoch Levin’s work.

In 1990, the Israeli Broadcasting Authority Television produced a film on Avi Toledano’s life in Morocco. The film was screened twice in two months on Israeli television, and caused great emotion in Israel and abroad.

He also recorded “Marocker” in Hebrew, based on ethnic Moroccan music.

In 1994 a “Best of Avi Toledano” album was released with great success.

In 1995/6 he conducted a large-scale coast-to-coast tour of North America, including performances at the Taj Mahal in Atlantic City and Palace Arts in Montreal Canada.