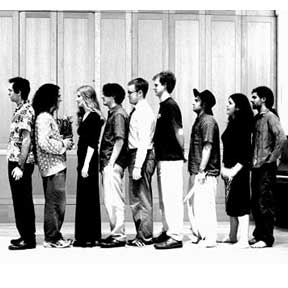 Founded in 1992 by Ken Richmond, the Yale Klezmer Band is agroup of undergraduate students from all different musical backgrounds. Klezmer,the music we play, is the Jewish folk/dance music whose roots lie in old Eastern Europe. It was popular in the United States in the 1930’s-40’s, when immigrants merged these roots with the big band style. It then nearly died out due to the assimilationist Americanization of the mid-century. Since the late 70’s, it is back, as indicated by the popularity of Itzhak Perlman’s recent recording entitled “In the Fiddler’s House.”

We are here to bring the joyous, rousing sounds of klezmer to the halls of Yale, to its Hillel as well as to anyone who likes energized dance music.Our performances don’t stop there, though: we have played down to Florida and would love to play even further. Weddings, Bar Mitzvahs, community events,private parties, and fundraisers in the New York/Connecticut areas are our standard fare.

Albums by The Yale Klezmer Band