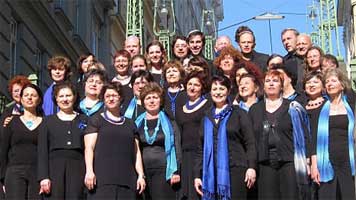 The Vienna Jewish Choir is actually a folk choir. Its repertoire consists of songs that were passed in Jewish families from generation to generation. Songs that have given the resistance fighters in the ghetto strength and comfort. And songs that were skipped from the main stage of Yiddish theater to the whistling lips of the audience. With all these tunes it is moving hearts again.

Songs have been important for the Jews since time immemorial. When playing together they expressed the sweetness, and above all, the hardships of life for centuries. Parents passed their songs on to their children. The Shoah interrupted this tradition painfully and much of the musical vocabulary has disappeared with the Jews of Europe. For the past 30 years the Vienna Jewish Choir has been committed to rediscover these songs and fill them with new life.

Through Roman Grinberg who has been the musical director after Lev Vernik, Oleg Berkovitch and Abraham Breuer since 2002, the Vienna Jewish Choir maintains close relations with the international klezmer scene. Also with some of the few musicians who survived the Holocaust and whose memory is preserved its repertoire.

In the rehearsals in Vienna as well as in concerts at home and abroad (from Israel to the Ukraine, from Florida to Moldova), the Vienna Jewish Choir performs Jewish songs in a wide variety, in Yiddish, Hebrew and Judeo-Spanish. As diverse as its repertoire is also the setup of the choir: men and women, Jews and Non-Jews, young and old, all united by their passion for Jewish music. And most importantly: living openness and respect and contributing to a lively intercultural exchange.

Albums by The Vienna Jewish Choir