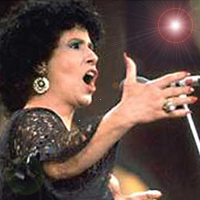 (1923 – February 14, 2006) was an Israeli singer and actress. Damari was born in Dhamar and emigrated from Yemen to Rishon LeZion in the British Mandate of Palestine with her parents in 1924. At a very young age she performed with her mother, and when she was 14 she had her first songs broadcast on the radio. She studied singing and acting at the Shulamit Studio in Tel Aviv, where she met Shlomo Busami, the studio manager who became her personal manager. They wed shortly thereafter in 1939 when she was only 16. That year, Damari also performed her first solo.

Her alto voice was distinctive because of her Yemenite pronunciation of some Hebrew letters. She was very well known especially in the period before and after the founding of the State of Israel. She is considered by all as the “Queen of Israeli song”.

Her first record was released in 1948 and her best known song Kalaniyot (Anemones) dates from that period. She was also known for her popularity amongst Israeli soldiers, for whom she frequently performed over several decades.

In the mid-1980s, Damari teamed up with Boaz Sharabi for a duet which restored a temporarily flagging career. She was awarded the Israel Prize in 1988 for her contributions to vocal music.

In 2005, aged 82, she recorded two tracks for the Mimaamakim album by Idan Raichel’s Project and participated in some of their live performances. The two had been slated to begin another joint project.

She died in Tel Aviv after a brief struggle with pneumonia. She breathed her last breath whilst Kalaniyot was sung by her family and friends who had been sitting in vigil during her final few days.