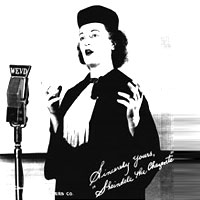 (1916-1981) Shaindele Di Chazante, born Jean Gornish, lived in Pennsylvania. She was believed to be the first woman to perform Jewish liturgical music though she never served in a synagogue. Jean came from an Orthodox Jewish family that believed in and followed this traditional lifestyle. Her father was a chazan at a local synagogue in Philadelphia and when she was asked to sing on the bimah, Jean refused in an attempt to uphold and respect her family’s cultural traditions.

Jean attended The Talmud Torah of Philadelphia where she excelled and received many certificates of merit and excellence. Her career as a singer flourished as she became well known in the Philadelphia community. Jean performed often, at services and at many charity events. She also performed on WPEN radio. She used her voice as a gift to touch the lives of many people in Philadelphia.

The Songs of Her People