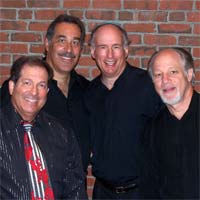 Safam, the Boston based six-man band, has dominated Jewish music in America with their “Jewish-American Sound” since 1974. Often copied, never duplicated, they are originals — original music, original lyrics, original arrangements — their songs have become a fabric of our Jewish lives. Songs like Leaving Mother Russia, Amnesty, Just Another Foreigner, Moranno and Nachamu Ami by group composers Joel Sussman and Robbie Solomon have become classics and have kept Safam at the forefront of the Jewish music scene.

Safam’s music covers the wide breadth of American musical styles while maintaining a decidedly Jewish flavor. They use many settings — whether it be Rock & Roll, Pop, Folk, Latin, Chassidic or Cantorial — to create their tapestry of music. Safam’s eclectic approach to its music has enabled it to reach out to Jews of all ages and denominations. With ten original recordings, a double Chanukah & Passover CD, and their Greatest Hits Collections, Safam has already earned a vital place in mainstream Jewish-American culture.

Safam is renowned not only for its highly regarded recordings, but is equally acclaimed for its inspirational and entertaining concerts. Typically, Safam performs for fundraisers, cultural events and conventions sponsored by synagogues, Jewish Federations, schools, youth groups and national Jewish organizations. Through its music, humor, passion and sensitivity, Safam instills in its audiences a sense of pride about being Jewish in America.

Safam audiences range in age from nine months to ninety years — a testament to the diversity of style and content Safam presents. Laughter and tears — singing and dancing — nostalgia and hope are among the whirlwind of emotional reactions that one experiences during a Safam concert.

After All These Years