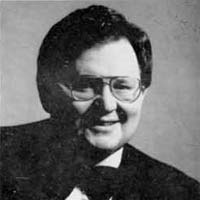 Ed Fogel (zl) was hazzan of Congregation Shaare Emeth in St. Louis for
many years. Born in Turkistan, he grew up in Toronto, and as a teenager
hitch-hiked to New York to attend Hebrew Union College. He was hired by
Congregation Shaare Emeth after graduation and ordination, and later
earned a master’s degree from St. Louis Conservatory of Music. He was a
founding member of the St. Louis Circle of Jewish Music, and a past
president of both the Circle and the American Conference of Cantors.

In his long career he proved a versatile cantor, accompanying himself on the
guitar, known as a comedian and as a teacher, he concertized and recorded
extensively. He passed away in 2002.

Soon afterward the St. Louis Circle of Jewish Music voted to dedicate its
annual spring concert to his memory.

A Festival of Jewish Music