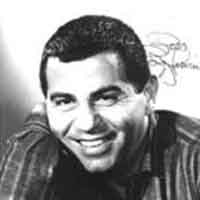 Ross Bagdasarian, Sr. (born Rostom Sipan Bagdasarian) January 27, 1919 in Fresno, California, USA – died January 16, 1972 in Beverly Hills, California, USA of a heart attack) was an American pianist, singer, songwriter, actor and record producer. In his professional life, he was better known by the stage name David Seville, which he used on his recordings featuring Alvin and the Chipmunks.

As a young man, Bagdasarian was in the Broadway cast of The Time of Your Life, written by his famous cousin, William Saroyan. Bagdasarian’s first musical success was the song he wrote with Saroyan, “Come on-a My House”, sung by Rosemary Clooney. The lyrics are based on dialogue from Saroyan’s novel The Human Comedy. They wrote the song on the post-Broadway tour bus of The Time of Your Life.

Bagdasarian had a moderate hit in 1956 under the name Alfi & Harry with the novelty record “The Trouble With Harry”, a song with the same title as the then-recent Alfred Hitchcock comedy-thriller movie. As David Seville, Bagdasarian had another number-one record with his song, “Witch Doctor”, which was also his first experiment with speeding an audio track to get the distinctive, comical, squeaky, high-pitched voices. That success led to him to record “The Chipmunk Song (Christmas Don’t Be Late)” with The Chipmunks, for which he won two Grammy Awards in 1959: Best Comedy Performance and Best Recording for Children.

After the hit records, Bagdasarian provided the voice for the David Seville character in the Chipmunks’ short-lived 1961 animated television series The Alvin Show.

The Chipmunks’ recordings, with the performers often labeled as “David Seville and the Chipmunks”, typically listed “Bagdasarian” in the authorship credit.

Bagdasarian, not yet 53, died of a heart attack in January 16, 1972, and was cremated at the Chapel of the Pines Crematory in Los Angeles, California. His son, Ross Bagdasarian, Jr., continued to release Chipmunks recordings and took over as the voice for David Seville and the Chipmunk characters, except for those performed by Ross Jr.’s wife, Janice Karman, such as Theodore and all of The Chipettes.