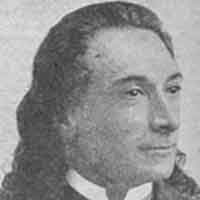 A young man from Galicia, named Naphtali Herz Imber, inspired by the founding of Petah Tikvah in 1878, wrote a poem about his feelings. A farmer from Rishon LeZion heard the poem and enjoyed it so much that he promptly set it to music. The song, originally called “Tikvatenu” (Our Hope), later became “Hatikvah,” the national anthem of the State of Israel, lifting the spirits of Zionists around the world for over a century.

Naphtali Herz Imber was born in 1856 into a Hasidic family. He received a traditional education, and left home at an early age to wander around the world. He came to Palestine in 1882 and stayed for six years writing essays, poetry and articles for Hebrew periodicals.

Tikvatenu, one of Imber’s most popular poems, was first published in 1886, although it had initially been read in public as early as 1882 to a group of farmers in Rishon LeZion who received it enthusiastically. Among them was Samuel Cohen who was born in Moldavia. He decided to set the poem to a traditional Moldavian-Rumanian folksong called “Carul cu Boi” (Cart and Oxen).

During the 1880’s in Palestine, many tunes and adaptations became folksongs, no one thinking of copyrights. The “Tikvatenu” melody thus quickly became anonymous, and Imber’s association with it all but forgotten.

“Hatikvah” was sung at the conclusion of the Sixth Zionist Congress in Basle in 1903, the last congress presided over by Theodor Herzl, who died tragically the following year.The anthem was sung at all subsequent Zionist Congresses, and at the 18th Congress, held in Prague in 1933, it was officially confirmed as the Zionist anthem.

In 1892, the poet Imber settled in America, where he was married for a brief time. It was here that his second volume of poetry appeared in 1900 together with Talmudic literature translated into English. In spite of these intellectual achievements, however, he found it impossible to make a decent living in New York City, and in 1909, he died in poverty.

His poem lived on, becoming the unofficial anthem of Jewish Palestine under the British mandate. At the Declaration of the State of Israel on May 14, 1948, “Hatikvah” was sung by the assembly at its opening ceremony.

The words of “Hatikvah” have a timeless relevance for Jews everywhere, reinforced by both good and bad experiences – reinforced by wars and peace treaties alike. Naphtali Herz Imber’s words are as old as the Jewish people itself, yet they are also as young as the State of Israel, which took them to its heart.