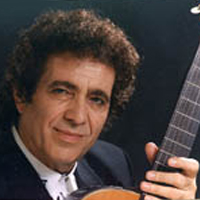 Ron Eliran, long considered “Israel’s Ambassador of Song”, is a one-man show combining the best of Israeli Traditional with the best of Contemporary International. Eliran, who was born in Haifa, Israel, received the “Violin of David Award”—which is the Israeli equivalent of the “Oscar” and “Grammy” combined—for the hit song “Sharm-El-Sheikh”.

Eliran has toured extensively throughout the world, performing in a variety of languages. Most recently he was a guest performer at the “Budapest Festival of Freedom” where his original composition became the Festival’s official song. Eliran also wrote both lyrics and music for the Broadway hit show “Don’t Step On My Olive Branch”, and for the widely acclaimed show “Nightsong”, in both of which he starred.

Eliran has captivated audiences on Israeli and American TV as well as in live performances in New York’s Carnegie Hall, in Washington’s Kennedy Center, in London’s Albert Hall, in Montreal’s Place des Arts, and in Los Angeles’ Music Center.

In the wake of Prime Minister Yitzhak Rabin’s assassination, Eliran, together with Gad Yaccoby, then Israel’s UN Ambassador, wrote a song about the late Prime Minister’s life. Eliran performed his poignant song in front of a crowd of 200,000 people at “Rabin Square” in Tel Aviv as part of a live nationally televised tribute for the fallen leader.

On August 31, 1997, Eliran performed in Basel, Switzerland, at the Centennial celebration of the First Zionist Congress. His performance took place in the same hall where Theodor Herzl first prophesied the birth of the Jewish State exactly 100 years ago. Eliran sang with the Basel Symphony Orchestra a song he wrote named “If you will it…” about Herzl and the Zionist saga.

Whether in an intimate club or in a big hall like Madison Square Garden, Ron Eliran is a distinctive voice who brings his people’s roots to life with love, nostalgia, humor and showmanship.

A Journey In Time