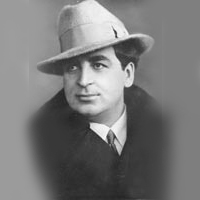 Pierre Pinchik [Pinchas Segal] (1893–1971) was one of the cantorial giants of the American Golden Age of Hazzanut and also one of the most musically educated among that group. He was born in Zhivotov, near Podolia, in the Ukraine, a region with a legendary cantorial past through its tragic connection with the infamous Chemelnitzki pogroms of 1638–50. According to a legend recorded by one Nathan Hanover, while the Cossacks and the local mob were slaughtering the Jewish population, the town cantor’s chanting of el male rahamim (the memorial prayer) over the murdered bodies in the streets so moved the attackers that they ceased the slaughter and spared the remaining 3,000 Jews. Whether true or not, this locally guarded legend tells something of the esteem for hazzanut in the environment in which Pinchik spent his childhood.

As a youth, Pinchik lived and studied at the Hassidic Skverer yeshiva. The Skverer rebbe—the head of the yeshiva and the community—had a particular affinity for music, so when important cantors were in town, they were often invited to stay at the rebbe’s home. As a yeshiva student, Pinchik thus became acquainted with them and with their art. While he was still quite young and already a competent pianist, he made a radical transition from the yeshiva to the conservatory in Kiev. Ironically, he began turning his attention to hazzanut and Yiddish song only during the early days of the Bolshevik Revolution. He was drafted into an artist’s brigade of the new Red Army, where he was asked to write revolutionary communist songs in Yiddish. He later recalled that these songs were based essentially on the traditional synagogue prayer modes and tunes he remembered from his yeshiva days, so that what emerged were antireligious and atheistic songs to fundamentally liturgical motifs. In the early 1920s he became known as a popular folksinger, touring parts of Russia and the new Soviet Union, and he took the name Pinchik. He also began officiating as a cantor in a Kiev synagogue. While in Leningrad on one of his tours, he was offered the post of chief cantor at the Leningrad Choral Synagogue.

As chief cantor, he was asked specifically to include much of the classical repertoire of the 19th-century Berlin composer Lewandowski, and of the German synagogue music tradition. He found such music incompatible with his vocal style and tastes, and he began by reworking many of those pieces with his own interpolations. Eventually he composed new settings altogether, mostly recitatives that would exploit the particular attributes of his voice.

In 1925 Pinchik left Russia, assisted in obtaining the necessary papers by Yiddish poet Itzik Fefer, his friend who was later murdered in Stalin’s massacre of Jewish poets. Pinchik appeared in concerts and synagogue services in various European cities, and he arrived in the United States in 1926 on a tour arranged by the illustrious Chicago-based cantorial manager and promoter Joseph Hyman, who was reported to have heard about Pinchik from the famous Russian bass Fyodor Chaliapin. Pinchik remained in America, where his fame and popularity came almost immediately. While many virtuoso cantors included some Yiddish songs in their concert repertoires, Pinchik excelled in that medium, and one of his most popular recordings was titled The Two Sides of Pinchik. In 1928 RCA Victor offered him an exclusive recording contract.

Nowhere was Pinchik quite as cherished as in Chicago, where he became the favorite of the orthodox/ traditional community. It was there, in that virtual mecca for hazzanut, that he probably had his largest popular following. The synagogue K’nesset Israel Nusah S’fard, on Chicago’s old West Side, where Pinchik officiated for many services, kept a sign in front all during the year proclaiming THE WORLD FAMOUS CANTOR PINCHIK PRAYS HERE.

Jewish audiences and congregations were dazzled by what they perceived as a “Hassidic fervor” permeating Pinchik’s music. People were also captivated by his rare poetic device of interpolating an indefinitely pitched speaking voice, almost a cantorial type of Sprechstimme, at climactic or highly emotional moments in the text—one of the hallmarks of his style. No discussion of Pinchik is possible without reference to his most famous signature recitative composition, Rozo d’shabbos, on a mystical Aramaic text from the Sephardi Sabbath liturgy (nusah s’fard), which has become a virtual “warhorse,” inviting countless cantors to try imitating his rendition almost as a sign of “arrival.”