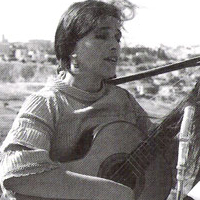 By all rights, Nehama Hendel should have become an enduring national treasure. She had a remarkable voice, one of the greatest of any Israeli singers ever. She came from the heart of the Israeli establishment. She was one of the first musicians to gain recognition overseas and bring publicity for Israeli culture. She spent a lot of time and energy creating work based on Israeli poetry.

But Hendel was also an eccentric woman who chose a path for herself that most Israelis could neither understand or abide. She made a number of personal choices which alienated herself from her audience and as a result spent decades in a self-imposed exile overseas. By the time of her premature death in 1997, she had already become kind of a historical relic. Today, although she is fondly remembered by Israelis of a certain age, Hendel is largely forgotten.

Recently, however, her name came up as part of a small, mildly controversial story. But I’ll get to that a little bit later on.

Hendel was born in 1936. She first gained prominence during the mid 1950s, performing in the Nahal Brigade’s entertainment troupe. By the standards of 1950s Israel, you couldn’t get much more mainstream than the IDF’s singing troupes. The Nahal Brigade’s was always considered the best, and for years served as factory for Israel’s most popular singers and actors. Hendel belonged to the legendary graduating class of 1957, along with Haim Topol and Uri Zohar.

Following their discharge from the army in 1957, Hendel, Topol, Zohar, and other members of the brigade formed the entertainment group Batzal Yarok (“Green Onion”), which basically performed the same material they had been but in civilian clothing. Green Onion got help from some of the country’s best songwriters, including Naomi Shemer, the greatest of them all.

In 1958, Hendel starred alongside Zohar in the film Amud Ha’Esh (“Pillar of Fire”), playing a Palmach soldier trapped behind enemy lines during the War of Independence. The film was fairly popular overseas, riding a wave of international interest and sympathy for Israel which was then celebrating its 10th birthday. (Ah, the good old days. How odd this concept sounds today!).

As part of this wave, Ed Sullivan arrived here looking for entertainers to appear on an episode of his show dedicated to Israel. Hendel recruited Ran Eliran, an old acquaintance from the army, and the two auditioned for Sullivan’s show under the name Ran and Nama. Sullivan was impressed, and booked the duo. They appeared to great fanfare.

Entertaining the masses, mid-1960sA big part of that came from Hendel’s beautiful singing. Someone once described the British folk singer Sandy Denny as having a voice “like a clean glass in a sink full of dirty dishes.” The metaphor holds for Hendel as well. by the early 1960s, the fresh singer that you hear on recordings with the Nahal troupe and Green Onions, had developed into an artist with power, control, and incredible clarity. A good example is her recording of “Donna Donna” from the early ’60s. Hendel worked the song from a poem by Aaron Zeitlin. In the recording, her voice cuts through the air with a perfectly controlled tremolo. Her clear enunciation and perfect phrasing bring to life the beauty of the words in the poem.

Ran and Nama continued to appear throughout the 1960s. Hendel and Eliran toured the world, packing places like the Royal Albert Hall. Hendel drew on folk music from around the world (she had a strong anthropological bent), as well as traditional Jewish sources for her material. In addition, she was also instrumental in bringing the work of Israel’s greatest writers to life. One of her most important projects involved tracking down every work by Haim Nachman Bialik, considered Israel’s national poet, which had been set to music.

The resulting album, “Nehama Hendel Sings Songs by Bialik” which came out in 1970, is considered one of her greatest achievements.

Hendel(left) and Shuli Nathan, with Jerusalem in the backgroundAt around the same time, in the late 1960s, Hendel reached the height of her fame and popularity. Hendel’s recording of Me’Al Pisgat Har Hatzofim (“Atop Mount Scopus”) became tied inexorably to the victory in the Six Day War, along with Shuli Nathan’s rendition of “Jerusalem of Gold.”

But then Hendel’s troubles began. During the ’60s, she discovered Subud, an international spiritual movement dedicated to inner growth. Strike one: as part of her involvement in Subud, Hendel changed her name from Nehama to Helena. She never bothered to explain the change to her confused fans, which was a mistake.

Strike two: she fell in love with a (non-Jewish) German guitar player named Anatole Rainier and married him. Hendel and Rainier had two children. The Israeli public did not look kindly on any of this. She began to get a lot of criticism from the media and her fans. No one, it seemed, was willing to accept a national treasure marrying a scion from the land of the Nazis. Hendel’s popularity took a serious hit.

As a result, she began to withdraw (strike three), appearing less and less frequently in Israel. Eventually she and Rainier pulled up stakes and left the country altogether. (They finally settled in Australia). Hendel spent the late ’70s and the ’80s touring around the world. After two decades of this, however, she decided she’d had enough and in 1994 she returned to Israel.

Hendel attempted to mount a comeback here, but it was too late. Yes, most of the controversy surrounding her had been forgotten, but so had Hendel herself. In 1997, she released MiHutz La’Seara (“Outside the Storm”), a collection of covers of popular Israeli songs. The album failed to arouse any interest, much to Hendel’s great disappointment.

Then, a year later on the eve of Yom Kippur, Hendel suffered a fatal heart attack. She was 62.

Had Hendel appeared on the scene a few decades later, her life choices would have been accepted a lot more easily. These days, Israelis are more used to spiritual seekers than they were in the ’60s. Her marriage to a German goy would have still filled the gossip pages, but probably not with the same tone of scorn; the press would have portrayed her as colorfully controversial rather than the way that they did, a borderline traitor.

Whether or not there is a moral to the sad story of Nehama Hendel is an issue for debate. It may be an illustration about the fleeting, fickle nature of fame or a testament to a traditional xenophobic streak Israeli society. Either way, it’s a tragedy that an artist with such a beautiful singing voice, a woman who labored hard to craft lasting testaments to Israeli culture, is now so largely forgotten.

The only time Hendel’s name came up in recent years was a few months ago. At issue, the song “Jerusalem of Gold,” originally sung by Hende’s friend and collaborator Shuli Nathan, and written by Naomi Shemer, who worked with Hendel during her IDF and Green Onion days. Over the years, “Jerusalem of Gold” has become a second Israeli national anthem. It is considered Shemer’s greatest work.

Shortly before she passed away last year, Shemer wrote a letter to her friend, the composer Gil Aldema, that the tune to the song was actually based on a traditional Basque lullaby popularized by the Spanish singer Paco Ibanez. Shemer had been asked about the similarity between the two songs, but had always denied having heard the Ibanez tune. It turned out that she had heard the song, and it had influenced her (at least subconsciously, she claimed).

Shemer, it seems, had heard the tune from one of the country’s most active folk music anthropologists: Nehama Hendel.

Shortly after Hendel’s death, Hed Artzi released a two-disc retrospective of Hendel’s music that is well worth seeking out.