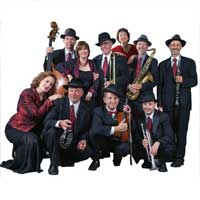 One of the first klezmer revival bands in the Midwest, the Chicago-based Maxwell Street Klezmer Band has been playing their blend of Yiddish pop tunes, dance music, and Jewish folk songs since 1983. Named after Chicago’s busy marketplace, Maxwell Street Klezmer Band injects horn-driven energy into the music of the past. With guitarist and vocalist Lori Lippitz, co-founder of Yiddish Arts Ensemble and a cantor of the Jewish Reconstructionist Congregation in Evanston, leading the way, the 15-piece group pays tribute to the Klezmer masters while allowing their music to evolve.

In 1989, Maxwell Street Jazz Band joined with choreographer Lynn Shapiro to launch a non-profit organization, the Yiddish Arts Ensemble, to present family-oriented theater productions. In 1994, this organization grew into the Klezmer Music Foundation under whose auspices the Klezmer and Yiddish Music Institute, a weeklong series of concerts and workshops, is held annually in the Midwest. The organization also supervises a teenage band, Maxwell Street Junior Klezmer Orchestra.

Since 1996, Maxwell Street Klezmer Band has joined with Peter, Paul & Mary’s Peter Yarrow and Jewish singer/songwriter Debbie Friedman for a Hanukah concert that has attracted an eager audience each year. The band’s peak year came in 1998. They performed in New York at Carnegie Hall’s Weill Recital Hall in February and Lincoln Center’s Damrosch Park in June. In November, they traveled to London, Munich, Vienna, and Amsterdam. ~ Craig Harris, All Music Guide

You Should Be So Lucky