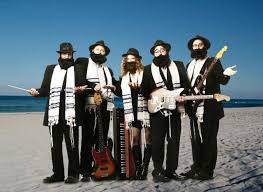 Meshugga Beach Party has been playing around the Bay Area since 2003 at clubs and festivals, including shows at AT&T Park and The Bay to Breakers. Live performances of the band have also been a hit on the web, with their “Hava Nagila /Misirlou” clip garnering over 100,000 viewings on sites like YouTube and Yahoo video.

Twenty Songs of the Chosen Surfers