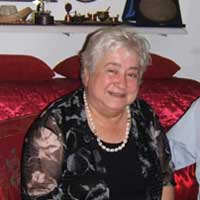 Israeli folklorist and ethnomusicologist, teacher and preserver of Ladino language and culture. Born, Milan, Italy, 1939 to a Sephardic family.

Her mother Diana Hadjes and father Alfredo were from Aydin, Turkey. She studied at the Jewish Community School and the University in Milan. Married Aharon Cohen, now the Director General of The National Authority for Ladino and its Culture, in 1960.

She received a B.A. in Italian Literature, Judeo-Spanish and Folklore in 1987 at the Hebrew University of Jerusalem. From 1974-1994 made a living as a records specialist at the Ministry of Foreign Affairs in Jerusalem. Since 1996 has been on the faculty of Ben Gurion University in the Negev as a Judeo-Spanish language instructor, and also teaches at Midreshet Amalia Jerusalem (since 1991). Since 1998 she has taught a course for Ladino Teachers, organized by The National Authority for Ladino and its Culture, in Jerusalem.