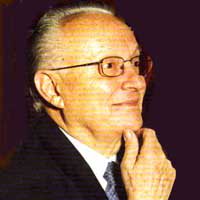 He was awarded a scholarship in the Superior Institute of Jewish Religious Studies of Buenos Aires where he graduated as Professor of Hebrew Sciences in 1952.

In Majón Lelimudei Hayadút, he receives his Semijá in Hazanut, to finish there the Bachelor in the Yiddish and Hebrew languages. At the same time, he studied his vocal and musical studies at the Conservatory, under the guidance of the eminent teacher Artur Volken, of the Vienna Opera, and director of Soloists at the Teatro Colón in Buenos Aires, as well as the distinguished Maestro Cosimo Mao of Florence, Italy. His tutors were the chief rabbis of Argentina, Dr. Jacob Fink, and Dr. Guillermo Schlesinger

He made specialization as Hazan with Hazan Abraham Blejarovich, Obercantor of the Israelite Congregation of the Argentine Republic, where he worked as Assistant Cantor.

In 1956, the Jewish Community of Mexico invited him to officiate in the services of Major Festivals, returning later to work in this country.

In 1961 he joined the group of founders of the then Bet-El Congregation, and a singular union began between Leibele Jinich and herself.

He visits frequently, with the consent of Bet-El, several communities of Central America, in his capacity as Liturgical Cantor. It offers auditions of traditional Jewish music in Radio Universidad and in the National Library.

He is a distinguished member of the Cantors Assembly of America, who honored him with the title of “Guest Cantor” at the 1976 convention.

He has composed liturgical interpretations that are sung by the vast majority of attendees to the various services, such as “Hinení”, “Unetane Tokef”, and “Kol Nidre” on Yom Kippur.

He has recorded several albums, and especially the CD dedicated to Kabalat Shabat, which was an unusual success.

He currently holds the title of Hazan Emeritus of the Bet-El Community of Mexico.