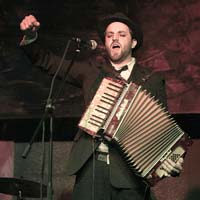 A Detroit area native, Dan attended the University of Michigan where he studied acting, directing, playwriting and poetry, winning the University’s most prestigious writing award, the Hopwood, three times and publishing Daylight Savings, a collection of his poems, with Ornithology Press.

After graduating and traveling, he settled down in New Orleans to focus on music and theatre. There he has done everything from late night piano lounge lizard gigs to bluegrass jams, leading punk circus parades through the street with his accordion to directing, producing, acting and composing music for a production of Brecht’s Man Is Man at the ARK Theatre (One of “the best productions of the year”-Times-Picayune).

From New Orleans, Daniel settled in New York. Soon to be hired back in Michigan to write the music and perform in Planet Ant’s “Lehrstucke” followed by the Ann Arbor Performance Network’s production of “Threepenny Opera.” It was these two projects that earned Daniel a nomination for an OPIE Award for “Best Musical Performance” by the Oakland Press, a major daily newspaper in southeastern Michigan.

Since leaving New Orleans he has lived, played music, recorded, acted, directed plays and composed theatre music in New York and Detroit and on a farm in Northern Michigan, where he helps produce a folk fest every fall. The farm is also headquarters for Earthwork Music, a collective label of Michigan indie folk artists.