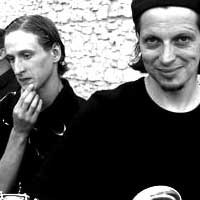 Christian Dawid (on the right, we believe) is one of Europe’s most remarkable reed players in folk music and beyond. He performed with artists like Boban Markovic, Theodore Bikel, Frank London, Brave Old World, Budowitz, Paul Brody’s Sadawi, Khupe, the Smyrna Trio and many more, on stages between North America, Europe and Japan.

Vasyl Baranovsky trumpet, bayan
Oleksandr Voronyuk tuba
Vitaly Baranovsky trombone
Guy Schalom drums
Christian Dawid clarinet, sax
Volodymyr Voronyuk trumpet
Volodymyr Baranovsky accordion
Vyacheslav Baranovsky barabankonsonans retro are a family brass band from Kodyma, Odessa region, Ukraine – and to many the cultiest and freshest new world music act to come out of Eastern Europe. For generations – and through countless hot nights – the Baranovsky family and their in-laws have been passionately playing the wild and sweet wedding music of Podolia, a powerful and soul-stirring blend of Moldovan, Ukrainian and unique Jewish tunes. And they sing! – everywhere they are.

In 2006, the band joined forces with Berlin-based master clarinetist Christian Dawid. Since then, the new konsonans retro have received enthusiastic response from thousands of listeners at prestigeous festivals in Poland, Austria and Germany and have been touring Germany, Switzerland and Ukraine. The first CD A Podolian Affair was released in March 2007 by Oriente Musik, Berlin.