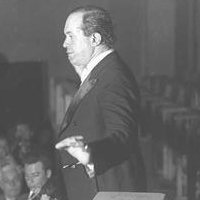 Marc Lavry was born in Riga, Latvia, but he received his major musical education in Germany. He studied composition at the Leipzig Conservatory with Paul Graener, and conducting privately with Hermann Scherchen and Bruno Walter. He also studied architecture at the Technical College in Oldenburg. After two years as conductor at the opera house in Saarbrücken, he went to Berlin, where he became music director and conductor for Rudolf von Laban’s dance theater. He wrote music for Max Reinhardt’s theatrical productions and for films, and in 1929 he assumed the post of conductor of the Berliner Sinfonieorchester (Berlin City Symphony Orchestra). During his years in Germany, Lavry began to address Jewish subjects in some of his music. His orchestral piece, Hassidic Dance (op. 22) and his Jewish Suite for string quartet (or string orchestra) were both premiered in Berlin in 1930 and 1931 respectively. He also evinced an interest at that stage in artistic conceptions of other folksong traditions, as demonstrated by his Variations on a Latvian Folksong (op. 11), which received its premiere by the Berliner Sinfonieorchester.

Lavry returned to Riga in 1933, two months after the National Socialists assumed power in Germany. The following year, the Riga Radio Broadcasting Symphony Orchestra gave the performance of his symphonic poem Ahasverus, the Eternal Jew, written the same year. But in the wake of the Fascist coup there, he determined to emigrate permanently. He had not become involved with Zionism, so that Palestine represented only one out of several options for him; he briefly considered both the United States and Russia as well. Like Ben- Haim, he made an exploratory trip to Palestine, after which he decided on aliya. He and his wife arrived there to settle in 1935. He was able to extend his otherwise temporary visa through the political department of the Jewish Agency for Palestine on the grounds that he was composing incidental music for the Ha’Ohel Theatre in Tel Aviv.

Within his first year in the y’shuv, Lavry wrote a symphonic poem for string orchestra, Al naharot bavel (By the Rivers of Babylon), programmatically related to Psalm 137 and the Babylonian Captivity. However, he came to straddle the line between art music and popular folk-oriented song. He not only incorporated indigenous folk material and echoes in his concert pieces—on the “Mediterranean” model—but he also composed original folk-type songs, the first of which was his Shir ha’emek (Song of the Valley [emek]), which referred to the Jezreel Valley in the north and evoked and celebrated the pioneering spirit of land reclamation and agricultural settlement there. He then developed it into a symphonic poem, titled simply Emek, which became one of his best-known pieces. It was premiered by the Palestine Symphony Orchestra—the first time it programmed a work by any y’shuv composer—and was later included in its first world tour as the Israel Philharmonic Orchestra. A preview of the premiere in the Israeli newspaper Ha’aretz dubbed it the “first symphonic hora”—referring to the quintessential emblematic modern Israeli folk dance pattern that pervades the piece.

There followed Lavry’s oratorio Shir hashirim (Song of Songs, 1940), and his opera Dan hashomer (Dan the Watchman, 1945), premiered by the Palestine Folk Opera and generally considered the first Hebrew opera composed in the y’shuv to be produced in Israel (Palestine). Written to a libretto by Max Brod and based on Shin Shalom’s play Shots on the Kibbutz, the opera was produced thirty-three times in eight cities and towns in Palestine. Throughout the music Lavry juxtaposes eastern European musical clichés and motifs against Near Eastern ones as a way of representing distinctions, almost as typological leitmotifs, between the older generation of immigrants from eastern Europe and the young generation of pioneers and kibbutz workers.

Lavry conducted the Palestine Folk Opera from 1941 until 1947. From 1950 until 1958 he was music director of Kol Tziyon Lagola (The Voice of Zion to the Diaspora), a short-wave radio network that broadcast to Jewish communities outside Israel.