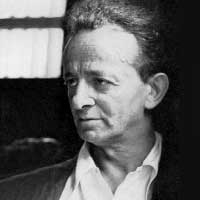 Itsik Manger (or Itzik Manger: May 30, 1901 – February 21, 1969) was a prominent Yiddish poet and playwright, a self-proclaimed folk bard, visionary, and ‘master tailor’ of the written word.

Early life
Manger was born in Czernowitz, Austria-Hungary (later Romania and now Ukraine) in 1901.[1] His father, Hillel Manger, was a skilled tailor in love with literature, which he referred to as ‘literatoyreh’ (a portmanteau of the Yiddish words literatura and Toyreh). As a teenager, Manger attended the Kaiser Königlicher Dritter Staats-Gymnasium, where he studied German literature until he was expelled for pranks and bad behavior.[2] He exchanged this traditional education for the backstage atmosphere of the Yiddish theatre.

Young poet
In 1921, Manger began publishing his early poems and ballads in several new literary journals founded in the aftermath of World War I. Soon afterwards, he settled in Bucharest and wrote for the local Yiddish newspapers while giving occasional lectures on Spanish, Romanian, and Gypsy folklore.[3]

In 1927, Manger came to Warsaw, the spiritual and intellectual center of Ashkenazi Jewry and “the most inspiring city in Poland.”[4] Manger lived in the capital of the Yiddish cultural world for the next decade, which became the most productive years of his entire career. In 1929, Manger published his first book of poetry, Shtern afn dakh (Stars on the Roof), in Warsaw to critical acclaim. By the following year, Manger was so well known that he was admitted to the select Yiddish P.E.N. club, along with Isaac Bashevis, Israel Rabon, and I. Papiernikov.[5]

Literary success
Between 1929 and 1938, Manger took the Warsaw literary world by storm. He gave frequent readings of his own poetry at the Writers’ Club, was interviewed by all the major Warsaw Yiddish papers, published articles in the prestigious journal Literarishe Bleter (Literary Pages), issued his own literary journal called Chosen Words filled with his poetry, fiction, and artistic manifestos. At the same time, Manger continued to publish his own works, including a series of modernist poems inspired by the Oral Torah (Itzik’s Midrash, 1935), a dramatic rewriting of the Purim story (Songs of the Megillah, 1936), a loose adaptation of Abraham Goldfaden’s The Witch of Botosani (Hotzmakh’s Shpiel, 1937), a series of fictional vignettes on the history of Yiddish literature (Familiar Portraits, 1938), and three more volumes of poetry (Lantern in the Wind, 1933; Velvl Zbarzher Writes Letters to Malkele the Beautiful, 1937; and Twilight in the Mirror, 1937).

Working with Biblical themes
Manger’s Itzik’s Midrash and Songs of the Megillah deserve special mention, as they represent his first attempts to re-write old, familiar material through a modernist lens. In Itzik’s Midrash, Manger presents a modern commentary on the classic Bible stories by anachronistically placing his characters in contemporary Eastern Europe. Manger’s playful attitude towards the original text is self-evident; in the introduction he writes, “As I wrote this book, the rogue’s cap of the Yiddish Purim play hovered always before my eyes.”[6] Inspired by the Purimshpiel genre, which used a traditional story to mock the norms and expectations of Jewish religious life in previous centuries, Manger’s Midrash radically revises traditional portrayals of Biblical characters by requiring them to justify their actions according to modern norms and values. Traditionally valued characters such as Abraham and Sarah are harshly critiqued, while underrepresented characters like Hagar and Ishmael are given a voice at last.

In Songs of the Megillah, Manger uses a similar technique to politicize and de-sacralize the Biblical text read aloud on Purim. Once again, Manger’s introduction classifies the book as “a kind of mischief-making on the model of Purim players in every age.”[7] Like Itzik’s Midrash, Songs of the Megillah is a modern, radical retelling of the story of Esther set in contemporary Eastern Europe. Manger even introduces a new character into the narrative: Fastrigosso, Esther’s jilted lover and a member of the Needles and Thread Tailors’ Union, who conspires to assassinate King Ahashverosh in order to win back Esther’s affections. Combined with his 1937 play Hotzmakh’s Shpiel, these three revival texts secured Manger his international reputation as “the master recloaker of the oldest and the newest literary traditions.”[8]

From Warsaw to Tel Aviv
With widespread anti-Semitism in the highest levels of Polish government and society, Jewish life in Warsaw became increasingly dire. Manger decided to leave for Paris in 1938, an exile from his creative homeland. However, Paris was not safe for long. In 1940, Manger fled to Marseilles, Tunis, Liverpool, and finally London, where he became a British citizen and remained unhappily for the next eleven years.[9] Disillusioned and unproductive, Manger immigrated to Israel in 1958, where he remained until his death in Tel Aviv in 1969.

Acclaim in Israel and elsewhere
Unlike most other exiled Yiddish writers, Manger was able to achieve significant success in Israeli literary and theatrical circles. In 1965, Dov Seltzer directed a highly popular production of Manger’s Songs of the Megillah, breaking the Israeli taboo on Yiddish theatre. Songs of the Megillah was a great success, setting a new record in Israeli theatre with its more than 400 performances. Prominent members of Israeli society, including politicians Levi Eshkol, Golda Meir, and Teddy Kollek, made highly publicized appearances at the performances. When he died in 1969, Manger was mourned as an Israeli national poet.

Manger’s poem “Oyfn veg shteyt a boym” has been set to music and has entered the repertoire of Yiddish song, for example as “Oif’n Weg Steht A Boim” it was a 1951 hit for Leo Fuld.