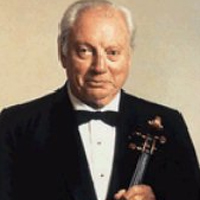 Born in Kremenetz, Ukraine, to Jewish parents. Stern was ten months old when his family moved to San Francisco. He received his first music lessons from his mother before enrolling at the San Francisco Conservatory of Music in 1928 where he studied until 1931 before going on to study privately with Louis Persinger.[1] He returned to the San Francisco Conservatory in 1932 to study with Naoum Blinder for five years. He said he owed the most to Blinder.[2] At his public début on February 18, 1936, aged 15, he played the Violin Concerto No. 3 in B minor of Camille Saint-Saëns with the San Francisco Symphony under the direction of Pierre Monteux.

Within musical circles, Stern became renowned both for his recordings and for championing certain younger players. Among his discoveries were cellists Yo-Yo Ma and Jian Wang, and violinists Itzhak Perlman and Pinchas Zukerman. He also played a major role in saving New York City’s Carnegie Hall from demolition in 1960 which later had its main auditorium named in his honour.[3]

Among his many recordings, Stern recorded concertos by Johannes Brahms, Johann Sebastian Bach, Beethoven, Felix Mendelssohn and Antonio Vivaldi and modern works by Samuel Barber, Béla Bartók, Igor Stravinsky and Leonard Bernstein. He also dubbed actors’ violin-playing in several films, one of which was Fiddler on the Roof.

Stern’s favorite violin was the Ysaye Guarneri del Gesù, one of the violins produced by the Cremonese luthier Giuseppe Guarneri del Gesù.[4] He owned also a Vuillaume and two contemporary instruments by Samuel Zygmuntowicz.

In his autobiography written with Chaim Potok, My First 79 Years, he cites Nathan Milstein and Arthur Grumiaux as major influences on his style of playing.

In 1979, eight years after Nixon’s first official visit, the People’s Republic of China offered Stern and pianist David Golub an unprecedented invitation to tour the country. Their visit was filmed and resulted in an Oscar-winning documentary From Mao to Mozart.

In 1987, Stern received the Grammy Award for Lifetime Achievement.

Fiddler On The Roof