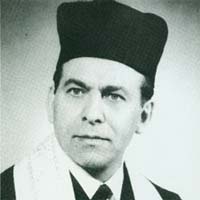 Cantor Goodfriend was born into a Chassidic family in Poland. At the age of 16, he was interned in a Nazi labor camp in Piotrokow, Poland. Escaping in 1944, he was hidden by a Polish farmer and was the only member of his family to survive the war. After the war, he attended the Berlin Conservatory of Music, McGill Conservatory of Music, Conservatoire Provincial de Quebec, the Music School Settlement, and Baldwin Wallace College. In 1952 he served as cantor at the Shaare Zion Congregation in Montreal and later at Cleveland’s Community Temple. He is now Cantor Emeritus at Ahavath Achim Synagogue in Atlanta.

In 1985, the governor of Georgia appointed Cantor Goodfriend to serve on the statewide Holocaust Memorial Commission, and in 1986 he was invited to participate in the centennial celebration for the Statue of Liberty. He has appeared in one Hollywood-made motion picture, “Summer of My German Soldier”. Cantor Goodfriend has earned many honors during his illustrious career, including the Kavod Award (Cantors Assembly for America) in 1995 and an honorary Doctor of Music Degree (Jewish Theological Seminary) in 1998. His memoirs, “By Fate or Faith” was published in 2002.