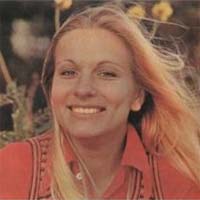 Ilanit (born Hanna Drezner-Tzakh September 17, 1947 in Tel Aviv, Israel) is a female Israeli singer who represented her country twice in the Eurovision Song Contest. In 1973 she first took part in Luxembourg where she reached the fourth position with the song “Ey Sham” (“Somewhere”). This was also the first ever participation of Israel in the Song Contest. The song was composed by Nurit Hirsh, who also conducted the orchestra in Luxembourg on that occasion. It was only the second time that the orchestra was conducted by a woman; the first time was on that very evening (Monica Dominique, “You’re Summer”, Sweden).

The second participation by Ilanit was in London in 1977 with a song entitled “Ahava Hi Shir Lishnayim” (“Love is a song for two”). With this song she came eleventh. Ilanit almost took part for a third time in 1984: she was appointed by IBA to sing the song “Balalaika”. The organising Luxembourg network, however, decided to organise the 1984 Eurovision Song Contest on an Israeli memorial day. The IBA subsequently withdrew their entry. At that time Ilanit was already one of Israel’s most popular singers and the song “Balalaika” became an instant hit, despite not taking part.

Ilanit was named Israel’s top female singer every year from 1971 to 1977, something no other singer has achieved.

In 1974 Ilanit represented Israel at the World Popular Song Festival In Tokyo ’74 with the song “Shiru Shir Lashemesh” (“Sing A Song To The Sun”). The final was held on 17 November and she came ninth.

Ilanit continued to experience major successes in her home country, with songs from the famous late composer/song-writer Ehud Manor and others. Together with other established Israeli artists she took part in a tour through North America in 2005. However, she has not released any new records since 1999; her last full album is “Brazilian Dream” (1996).