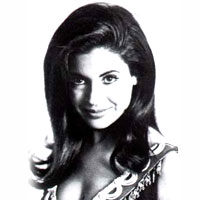 A Yemenite singer who began her career at the age of ten, Hanna became an international celebrity on the world stage and remains so today.

1942- Ten year old Hanna meets composer Nachum Nardi, II who rushes to sign a contract with the young singer. With Nardi as her musical guide, Hanna begins to perform gives concerts throughout Israel.

1948- Director Moshe Va]in asks Hanna to join his “Li La Lo” theater. The 15-year-old performs with leading celebrities and sings “Zohara” and “Zecharia Ben Ezra” which were written for her and became her First hits. She receives many offers to perform outside the country but declines them all in order to complete her studies.

1951-3- Hanna Ahroni joins the Golani division of the Israeli army and performs with their musical troupe, which later becomes the Northern Command Troupe.

1954-Hanna appears in the “Do-Re-Me” theater at which time “Shchora Ani Vena’ava” (by Danie]]a Bor) is written for her. The song requires a 4-octave range and reveals Hanna’s virtuoso talents. Her sinqing makes a great impression in Israel and throughout the world and marks a turning point in Hanna’s career.

1956-7 Shows throughout Europe. Hanna is invited to France. She performs in top casinos in Monte Carlo, Monaco, Cannes etc., and appears on numerous television shows. She performs at the renowned Olympia Theater and later sings at the Brussels Concert Hall in Front oF the Queen, who invites her to the Palace after the show. Praised by Edith Piaf For her stage performance of the liturgical piece, “Sheyibane Beit Hamikdash”, Hanna is asked to repeat the performance in a live television broadcast with her. This prompts British television to ask Hanna to come to Eng]and to perform with Chades Laughton. During this period Hanna records albums For President, a Vegas Yule Parisian record company.

1958- Hanna returns to Israel and performs to sold out crowds throughout the country.

1959-62- Hanna records in Israel and New York and is invited to perform in South America, Venezue]a, Mexico City, Argentina and Canada. In New York she appears at the Famous “Chateau Madrid” night club.

1963-5- Hanna arrives in the United States and meets her personal manager and future husband, Chaim Tishman. America gets its first Full taste oF Hanna. Under Chaim’s management she begins a concert tour of California and is qiven the key to the city of Los Angeles by its mayor, with all the media in attendance. She travels throuqhout the country and her concert appearances sell out everywhere. In order to further advance her international career, Hanna and Chaim engage the services of one oF America’s most prominent arrangers, H.B. Barnum, the creative genius behind Aretha Franklin, as her musical director. Barnum produces Hanna’s first U.S. album, “A Taste of Hanna”, which is distributed by RCA and includes a soul-stirring rendition of the theme From “Exodus.” The stellar sales of this album lead to Hanna’s performing in the night clubs and concert halls Frequented by Sammy Davis Jr., Ray Charles, Eddie Fisher, Danny Kaye, Allen King, Charles Aznavour, Enrico Macias and many others. Hanna also appears on many television shows including Johnny Carson, Merv Griffin, Ed Sullivan and others In recognition of her growing popularity, she stars in a 1-hour television special with Paul Anka.

1966-The Famous “Caesar’s Palace” opens in LasVegas. Hanna is engaged for a month’s performance in the hotel’s main theater, where she is joined by Johnny Mathis and comedian Frank Gorshin. Acclaimed by the critics, she is contracted to perform there For two months during each of the the next four years. It is at this time that her daughter Keren is born. This does not interfere withher signing long-term contracts For appearancesn at prominent night clubs in Aruba, Puerto Rico, Curacao and elsewhere.

1967-72- Hanna hosts a series of TVshows, “An Hour With Hanna Ahroni,” broadcast on Mexican, Venezuelan, Argentinean and Brazilian television. She a]so appears in concert throuqhout the U.S. and Canada. She stars with Harry Belafonte at the month-long celebration of the opening of the luxurious Hilton Plaza in Miami. In the midst of her concert tour the Six Day War erupts. Hanna cancels all commitments and returns to her homeland to perform For the soldiers and the wounded in hospitals. She is asked to represent Israel at the 1968 Olympics in Mexico. The O]ympic Committee chooses her to be the “Face of Peace” and puts her picture on billboards throughout Mexico. She volunteers to perform For the poor and becomes an icon in Mexico, as people put her picture side by side with the Virgin Mary and Jesus.

1971- Hanna appears at Carnegie Hall and Lincoln Center. She performs in both of these halls Frequently over the next 12 years. After many refusals Hanna agrees to appear on German television. Immediately, thereafter she is approached by German recording companies. She signs a long-term contract with Polydor.

1972- Hanna goes to Frankfurt to record. The composer of “Viva Espaffa asks her to record his song, which he wrote in German For German tourists headed to Spain. Hanna records it in German and it becomes a huge seller in Europe. While on holiday in Israel Hanna receives an urgent call to return to Germany to record “Viva Espana” in Spanish. This version becomes a worldwide Hit.

1973- The Yom Kippur War breaks out. Hanna once again returns to Israel to perform for the soldiers and the wounded. Contacting them at Polydor in Germany the Spanish government invites Hanna and her husband to be their quests at a location of their choosing in Spain, in appreciation of the recognition that Hanna’s recording of ” Viva Espana” has brought them. When the couple arrives the Ministry oF Tourism realizes For the First time they are Israeli. At this point Spain is under Franco’s rule, and relations with Israel are chilly at best. Consequently their scheduled press conference is canceled, but Hanna and her husband are nonetheless treated with reserved respect. They enjoy their vacation in Spain, politics notwithstanding.

1973-81- Hanna records additional albums for Polydor. Residing in the U.S. she performs in Mexico, South America, Europe, Israel and throughout the States.

1998- Hanna receives the Medal of Honor From the Yemenite Federation of America For being a singer who has greatly honored her Yemenite roots.