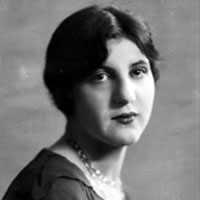 Emma Lazaroff Schaver was a member of the first cultural mission to Europe sponsored by the World Jewish Congress and UNRWA, a UN agency. She traveled from camp to camp in the American zone in Germany presenting concerts of Yiddish and Hebrew songs to the survivors — reviving their Jewish soul.

“When I saw the condition of the people, I volunteered to stay longer.” Mrs. Schaver remained in post war Europe for six months because “I felt I had something to do there.”

“I was stunned by the attitude and will to live of those people. Men and women who had lost their husbands, wives, and children went on to remarry and start new lives,” she said. “That’s the Jewish people, determined to go on, to build again.”

She said the Jewish camps had schools, taught trades, and trained machinists, carpenters, barbers and more. “There was action, energy, and a beehive of activity. It was an amazing experience.”

Even earlier, when the first group of survivors of the concentration camps had been allowed into the United States immediately after World War II, Emma Schaver went to Camp Oswego in upstate New York to sing for the refugees. She said the priorities were first to save them and sustain them and next to give them something for the soul. “That was something I could do,” she said.

Born in Russia, she came to this country at the age of 18 months in 1906. She and her mother arrived in Boston and went immediately to Rochester, New York. “After about four or five years, with a few stops along the way, we settled in New York City’s Jewish ghetto of Brownsville.”

Emma was the eldest of seven children, but found that being the first was “not ever a burden.” The immigrant family struggled to make it.

“Father was a nice man, but not aggressive,” she said. “My mother was a noble lady with great inner pride. She was a special person and I never felt poor.

Together they gave me something tremendous.” By 1914 when the First World War broke out, the family had moved to Detroit where Emma attended.

She recalls dancing in the streets in 1917 when the British government issued the Balfour Declaration calling for creation of a homeland for the Jewish people in what was then Palestine. Emma declares she was a Zionist in her mother’s womb, that she cannot remember ever not being one. “My father was a labor Zionist and that was the path I followed.”

Emma always sang, she says. “I usually say that it was not special, it was simply breathing out and breathing in. But my whole consciousness was singing.”

After graduating from Northern, she held different jobs so she could help the household. She studied at the Detroit Conservatory of Music and at age 16, she traveled to New York City to live with relatives and to study at the Juilliard School of Music. Later she sang with several opera companies, and with the Detroit Symphony Orchestra, the Israel Symphony Orchestra, Kol Zion L’gola Symphony and the Haifa Symphony. She sang concerts in Europe, North and South America and in Israel and has two record albums to her credit.

In 1924 she married Morris Schaver who had been a regular visitor in the Lazaroff home for several years and was a favorite of her mother. “I knew him a long time before we married. We would walk down Michigan Avenue together,” she recalled. The marriage spanned more than 30 years until Morris Schaver’s death. Childless, the couple reached out to Isaac who became their son and remains close to his mother.

Emma Schaver never stopped living her commitment to supporting the state of Israel and the Jewish community of the world. Her first tour of the land that would become Israel was in 1932. During the trip she delighted in the winding streets of Jerusalem, the busy port of Jaffa and the singing and dancing on the kibbutzim. She wrote to her family: “You have no idea the feeling to be in your own home.”

“I was through and through a labor Zionist,” she said, “And I met many of Israel’s greats. I met Golda in the ’30s when she came to Detroit as Shaliach for Pioneer Women. I knew Ben Gurion, Ben Tzvi, Shazar and more. That was my circle.”

A noted philanthropist in this community, in Israel and in others, Emma Schaver has supported cultural and educational causes for which she has received many citations and honors. She is the recipient of the Leonard N. Simons History Award of the Jewish Historical Society of Michigan. As she says: “I’ve tried to do the best for people.”

Emma Lazaroff Schaver believes that she has been the recipient of two precious gifts, her Jewish heritage and her talent as a singer. For all her 91 years, she has made an effort to share both.

“As a child, I felt sorry for anyone who wasn’t Jewish,” she said, explaining that every facet of Jewish culture was valued by her parents and by herself. The traditions of Judaism have been her standard and guide.

From The Heart Of A People