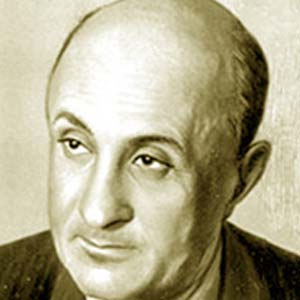 Yiddish poet. Born in Korostyshev, not far from Kiev, Dovid Hofshteyn was educated at a heder and by private teachers in Russian and Hebrew. His father, a forester, was a maskil; his mother came from the Pedotser-Kholodenko family of klezmer celebrities; and his sister, Shifra Kholodenko (1909–1974), was a noted Soviet Yiddish poet. Hofshteyn began writing poems at age nine, initially mostly in Hebrew, Russian, and Ukrainian, and his cultural experience in these languages influenced his Yiddish poetry.

At age 17, Hofshteyn became a private teacher and later studied at Kiev’s Commerce Institute. He welcomed the Bolshevik Revolution, and his Communist sympathies became even stronger after the heroic death of his cousin, Osher Shvartsman, a Red Army volunteer who was later canonized as the founder of Soviet Yiddish poetry. From 1917, when Hofshteyn’s poems began appearing in Kiev’s Yiddish periodicals, he occupied a prominent position in that language’s literary circles, particularly of the Kultur-lige. Although his first book, Bay vegn (At the Road), did not appear until 1919 (its enlarged edition was published in 1924 in Vilna), Hofshteyn soon had a following among aspiring poets.

In 1921, Perets Markish wrote about Yiddish literature’s successful “leap forward”—from the sentimental poet Dovid Eynhorn to the modernist Hofshteyn. Marc Chagall illustrated Hofshteyn’s 1922 collection Troyer (Mourning; reprinted in Tel Aviv in 1983), evoking the pogroms of postrevolutionary Ukraine. The Russian poet Sergei Esenin wrote in 1923 that his own American translator into Yiddish, Mani Leyb, promoted “young Jargonists with rather beautiful talents from the period of Hofshteyn till Markish” (Sergei Esenin, Sobranie sochinenii v trekh tomakh [Moscow, 1987], vol. 3, pp. 126–127). In other words, Hofshteyn was perceived as Markish’s forerunner, though in reality both appeared in print at more or less the same time and belonged to very different, if not opposing, poetic trends. Moyshe Litvakov crowned Hofshteyn “the first Yiddish classic,” who together with a few other Kiev poets had found a “shortcut” to modern creativity. While Soviet critics usually hailed Hofshteyn’s poems, they often criticized him for being “too aesthetic” and “too elitist,” which implied belonging to the category of petit bourgeois rather than proletarian writers.

From 1920, Hofshteyn lived mainly in Moscow, working as an editor for Jewish Communist authorities and chairing the Sholem Aleichem Theater Group, whose objective was to contrast the Moscow Chamber Yiddish Theater’s avant-gardism with a realist Yiddish stage. With Yitskhok Nusinov and Nokhem Oyslender, he formed a Yiddish publishing house called Lirik in 1921. The next year this enterprise launched an imprint for young writers, Vidervuks (New Growth); then, a literary group associated with this imprint became known by the same name. Hofshteyn, who edited and prefaced the pamphlet-sized poetic collections, was the recognized leader of the group. He was also a central figure in the journal Der shtrom.

Hofshteyn was ostracized in 1924 for signing a memorandum to the government backing the teaching of Hebrew. He left the country in despair, spending a short time in Berlin before moving to Palestine. Struggling to make ends meet in Tel Aviv, he published poems and articles in Hebrew periodicals. In 1926, he regretted his actions and returned to Kiev, where he had left two sons by his first wife. With Itsik Fefer and a few other writers, he then studied under the supervision of Oyslender at the Kiev-based Chair (the precursor of the Institute) of Jewish Proletarian Culture at the Ukrainian Academy of Sciences. Fefer characterized Hofshteyn as a “talented poet and worthless politician.” Yet the Hofshteyn–Fefer duo worked rather harmoniously, leading the Yiddish literary circles of Ukraine. Hofshteyn was targeted by proletarian critics of Leyb Kvitko for supporting the latter in 1929. Buzi Olevsky (1908–1941), a Soviet Yiddish poet and scholar (his graduate research concentrated on Hofshteyn’s oeuvre), wrote in the November 1933 issue of the journal Natsional’naia literatura that Hofshteyn was “the last distinguished mouthpiece of ideas of the [Jewish] nationalist petit bourgeois intelligentsia.”

Nonetheless, in 1934, after the formation of the Soviet Writers Union, Hofshteyn represented Yiddish literature on the board of the Ukrainian Writers Union. That same year, he wrote that the muse no longer inspired him, and that his poetic mission changed: “Sense and detect / that everything in my country / is being led and drawn to life and rising / only by great love / and great judgment” (“A rege” [A Moment], published in Almanakh fun yidishe sovetishe shrayber [Kiev, 1934].

Hofshteyn survived the devastating purges of the 1930s. Moreover, he was decorated by the state in 1939, becoming a member of the Communist Party the following year. On the eve of World War II, he defined himself as “a Jew of a new style” and was “proud / to belong / to the nation that does not become tired / and that builds / and believes / that in order to be immortal / one does not have to be already dead” (Dovid Hofshteyn, Geklibene verk [Moscow, 1948], p. 105). An activist of the Jewish Anti-Fascist Committee from 1942, he was the first of its leaders to be imprisoned for “anti-Soviet activities” in September 1948. Shortly before his arrest, he sent a telegram to Golda Meir about the need to revive Hebrew in the USSR. He was executed on 12 August 1952. The poet’s widow, Feyge, established the Dovid Hofshteyn Prize for Yiddish Literature in Tel Aviv in 1987.

Time had little impact on Hofshteyn’s style. His aesthetic orientation toward Russian and European classics remained unchanged throughout his career. As his poetry matured, the metaphoric resonance of his verse became deeper and his imagery more elaborate, but his poetry always retained clarity of form and content. Hofshteyn successfully adjusted his neoclassical poetics to the formal requirements of socialist realism with minimal compromise in quality. By avoiding topical references, he offered little ammunition to his proletarian critics; his historical optimism and universalistic outlook guarded him from accusations of decadence and nationalism. Hofshteyn’s poetry remains a lasting cultural legacy of Soviet Yiddish literature.