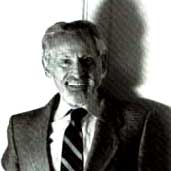 Native of Vilna, David Rogow attended drama school in that city and began his theater career in “Maydim,” Vilna’s puppet theater, and the “Oavke” variety theater. In the early 1940s he was a member of the Yiddish State Theater in Minsk. From 1946 to 1950 he was part of a Yiddish traveling theater company based in Munich, which performed in D.P. camps. His best known role during that period was as “Dovid Reuveyni” in A. Giants Leyeles’ Shlomo Molcho.

He arrived in New York in 1950 and joined the Hebrew Actors’ Union, still appearing in Europe as well. Mr. Rogow has played many roles at New York’s Folksbiene Theater, most noteworthy among them, the lead roles of “Shimele Soroker” in 200,000 by Sholem Aleichem, and of “Berezovsky” in Ephraim Kishon’s Marriage Contract. He continues to read every year on Sholem Aleichem’s yortsayt, selections by the great Author at the home of his granddaughter Bel Kaufman.

Mr. Rogow has been involved with the YIVO Institute for Jewish Research since 1972. Prior to that, he was a staff member of the Great Dictionary of the Yiddish Language. He is currently Managing Editor of YIVO Bleter. He has made two cassettes of Yiddish stories by Sholem Aleichem through the National Yiddish Book Center.

‘Bontshe the Silent’ and Other Selections from Yiddish Literature