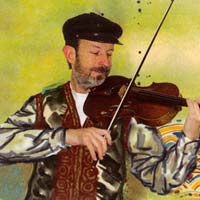 Graduated from the Antonio María Valencia Conservatory in Cali (his hometown) Colombia. He studied with masters Kart Bieler, Tobias Khune. With Alberto Lysy and René Clemencia in Bariloche Argentina, and Giorgio Ciompi at Duke University.

From an early age he was part of the Cali’s Chamber Orchestra and the Philharmonic of Bogotá, with which he acted as a soloist. He was also a member of the Symphony of Colombia, of the North Carolina Symphony and the Camerana Bogotá and the Conductors’ Institute Orchestra was an assistant concertmaster. In Mexico he belonged to the Philharmonic of Mexico City, serving as principal of the second violins and the soloists of Mexico under the direction of Eduardo Mata and two tours of Europe. He is currently the first violin of the Viceregal Chapel of New Spain, Aurelio Tello director, founder of the Drushba quartet, The Ensamble Remembranzas and the Shtelt Klezmer.