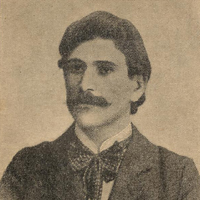 
Was a prolific Yiddish poet and short story writer for the American Yiddish dailies.

He was born in Minsk but emigrated to the United States in 1914. His poems express the feelings of the exploited Jew and the sufferings of the Jewish community.

By the year 1909 the Reisen family became split in two: Rivka and Hirsh were already in the U.S. to which they emigrated sometime around 1895, and Kalman, Abraham, Sarah (now married to the writer David Kassel) and Zalman settled in Warsaw. Zalman, barely 20, had already to his credit the publication of the first of his groundbreaking textbooks of Yiddish grammar, and he completed the Yiddish translation of Dostoyevski’s Crime and Punishment (with Sarah’s help). Afterward he set out to do a project with which he would be preoccupied for the rest of his life: to bring together in one publication the bio-bibliographic information about all past and current authors who wrote and published in Yiddish – going as far back as medieval times. His passion for Yiddish and the goal to defend Yiddish against its detractors found a powerful outlet in this endeavor: a literature this old cannot be a product of a “jargon”; it must be a product of a sustained national creativity. Thus, in 1914 a one-volume Leksikon fun der yidisher literatur un prese came out, and then, between 1926 and 1929, a greatly expanded four-volume Leksikon fun der yiddisher literatur, prese un filologie, Zalman Reisen’s main opus, was published in Vilna. Zalman was determined to publish an additional fifth volume devoted to the contemporary Yiddish writers, and he continued collecting biographical data from the writers themselves. In the end the volume was not realized, but the huge collection of documents which Zalman assembled is now preserved in the YIVO Archives.

The New York period in Abraham Reisen’s life that began with his arrival here in 1914 lasted until the end of his long life. He married his wife Sarah, and a daughter Shaindl (Jeanette) was born to the couple in 1919. He also began his long association with the New York Yiddish newspapers Tog (“The Day”), Frayhayt (“Freedom”), and Forverts (“The Jewish Daily Forward”). From 1929 on he worked exclusively for the Forverts, where he wrote a story each week, without a break. When a long illness befell his daughter Sheyndl that affected her eyesight, Zalman Reisen wrote a personal letter to Abraham Cahan, the editor-in-chief of the Forverts, pleading with him to grant Abraham Reisen a month’s vacation so that he could get some rest. Abraham also published several editions of his works, including collected works in 14 volumes, and autobiographical Epizodn fun mayn lebn (“Episodes From My Life”) in 3 volumes.

Like his brother Zalman, Abraham Reisen was a commited and active Yiddishist, but his style was different. Abraham was one of the founding fathers of Yiddishism, along with Chaim Zhitlovsky, Y.L. Peretz, and his close friends Shalom Asch and H.D. Nomberg. He was present at the Czernowitz Yiddish Language Conference of 1908 at which Yiddish was proclaimed a national language of the Jews. But he was no firebrand activist. He lent as much support and encouragement forYiddish-related projects as he could muster, and he let his name be used to grace a variety of Jewish institutions: schools, libraries, camps, cultural centers, even Jewish agricultural colonies in the faraway Soviet Crimea in the 1920s. Yet it was his quiet presence, his personal modesty that was so beguiling to his admirers. “Reisen had to be an exceptional person to have virtually left no ‘enemy’ among his colleagues” – editorialized The Jewish Spectator at the time of Reisen’s death in May 1953 – “There are many Yiddish writers who owe their success to Reisen’s encouragement. For years he published and edited, under great sacrifices, Yiddish journals with the primary aim of providing a platform for young, struggling writers… He had no arrogance, no pretensions and no personal vanity.”

Reisen’s Yiddishist credo is thus explained by Irving Howe: “The miracle of a Reisen is not that he derives from the people but that he remains at harmony with them…Precisely because he regards being a Jew as a “natural” condition of life, beyond query or challenge, his poems and stories take his culture utterly for granted: they neither explain nor justify” 6 ; and more: “Yiddish poets have absorbed tonalities from Heine and Pushkin, techniques from Blok, devices from Eliot; but it is the founding fathers of the literature – Mendele, Peretz, Sholem Aleichem, Reizen – who loom across every page written in Yiddish.” The concept of Yiddishland, an extraterritorial homeland of Jews, grounded in the Yiddish language, emanates from Reisen’s every phrase and stanza, and resonates in the hearts and minds of his readers.

As if to underscore the bond with his readers, Abraham Reisen took up residence around 1930 in the Sholem Aleichem Houses, the co-op built for the Yiddishist-minded trade-unionists at Giles Place near Sedgwick Avenue in the Bronx. Yiddish could be heard there in the hallways and on the streets, and Yiddish cultural events were organized every now and then in the co-op’s club. By subway, it took over an hour to reach the Forverts building located on East Broadway on the Lower East Side and the famous Cafe Royale – The Yiddish writers’ haunt which Reisen frequented.

Abraham Reisen died in 1953, at the age of 77. He was preceded in death by his sister Rivke and brother Hirsh who both passed away in the 1940s. Their sister Sarah continued her literary career until her last years. She died in 1974, and with her passing the saga of the Koydanover Reisens came to an end.