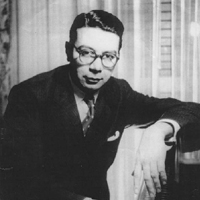 Born in Santa Fe, Argentina in 1921. He is a non-Jewish composer.

Ariel Ramirez began his piano studies in Santa Fe, and soon became fascinated with the music of the gauchos and creoles in the mountains. He continued his studies in Córdoba where he met the great Argentinian folk singer Atahualpa Yupanqui. Following a suggestion from Yupanqui, he visited the Nordeste and deepened his research into the traditional rhythms of South America. At the same time continuing his academic studies as a composer at the Conservatorio Nacional of Buenos Aires. In 1946, with RCA, he made his first recording.

He went on to study classical music in Madrid, Rome and Vienna, from 1950 to 1954. On returning to Argentina, he collected over 400 folk songs and popular songs and founded the Compañía de Folklore Ariel Ramírez.

Misa Criolla is by far his best known composition:

Entirely based on traditional rhythms (chacarera, carnavalito, estilo pampeano), it is also one of the first masses to be celebrated in a modern language – being contemporary to the Second Vatican Council. Ramírez wrote the mass in 1963-1964 and it was recorded in 1964 by Philips Records, directed by Ramírez himself with Los Fronterizos as solo performers (Philips 820 39 LP, including Navidad Nuestra). It was not publicly performed until 1967 in Düsseldorf, Germany, during a European tour which eventually brought Ariel Ramírez before Pope Paul VI. Equally famous are the recordings with the great solo voices of George Dalaras (1989), Jose Carreras (1990), and Mercedes Sosa (1999).

Today, Ariel Ramírez is president of the Society of Authors and Composers of the Republic of Argentina (SADAIC).

Other major compositions by Ramirez include the Cantata Sudamericana (again with text by Félix Luna, 1972) and another mass: Misa por la paz y la justicia (with liturgical texts by Félix Luna and Osvaldo Catena, 1980).