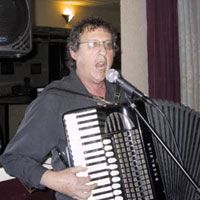 At the age of 11 his parents surprised him by placing a small accordion at his bedside.

Ami woke up one morning, discovered the accordion, started playing and have not stopped ever since. Ami began taking accordion lessons and at the age of 13 he was already engaged with Israeli folk dance sessions.

Upon completion of the military duty, Ami joined the Israeli delegation for an International folk dance festival which was held in Vienna Austria.

On his return to Israel, Ami registered at the music teacher seminary in Tel Aviv. His plan to study was interrupted by a representative of the “Karmon dancers and singers” who rushed Ami to the Dan hotel in Tel Aviv to play for the dance group as they were auditioning for the “Ed Sullivan T.V. show”.

Ami joined the “Karmon dancers and singers” for the trip to the U.S. and than continued to central and south America. The tour ended in Bogota Columbia. Ami went on with the “Sabra Dancers and Singers” to perform in south Florida, New York city and the catskil mountains in upstate New York.

At the end of this tour, Ami stayed in Miami Beach, than moved to New York, got married and his two children Ron and Rinat were born.

Ami studied conducting at the “Mannes college of music” in NYC , he was a music teacher in several Hebrew schools in NYC and Long Island. Ami was also the music accompanist for the late Israeli singing star Shoshana Damari. Ami toured with Damari the U.S. and Canada for 8 years.

Ami was the accompanist and musical director for the Yiddish theatre on Broadway.

Ami accompanied many Israeli performers in the U.S., among them Yaffa Yarkoni, Ahuva Zadok, Geula Gill, Aric Lavie, Joe Amar, the “Theatre quartet club” and others.

In 1969 Ami returned to Israel, he was accompanist and musical director for several variety shows and participated in the filming of a special T.V. show “Thirty years of Israeli songs” hosted by actor Haim Topol.

In 1980 Ami returned to south Florida, he joined the Central Agency for Jewish Education as a music teacher in several large Hebrew schools.

Ami is hosting a Hebrew radio show on Galey Israel radio in Miami. The show is aired live each Sunday on www.galeyisrael.com from 12-2 pm Florida time and repeat shows 7 days a week 24 hours per day. The show is also aired on www.amigilad.com

Ami participated in many Israeli cultural activities produced for the Israeli and Jewish communities in south Florida.