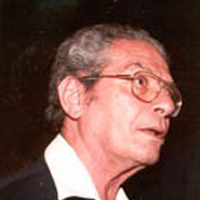 Born Alek Wolkovsky. Composed “Shtitl, Shitl” at age of 11. Sixty years later, the director, Racheli Schwartz, found the child composer, who had since immigrated to Israel, changed his name to Alexander Tamir, and became a renowned pianist.

Professor of piano; chair, the piano department at Jerusalem Academy of Music; a pivotal figure in the musical life of Israel, and especially of Jerusalem.

Artistic director, the Targ Music Centre in Ein Karem, Jerusalem. Half a century ago, formed a piano duo with Bracha Eden, which became world-famous and remained active until Bracha Eden’s death last year.

The duo studied with Victor Babin and Vitya Vronsky and won the international Vercelli duo competition in Italy. The worldwide performances and research by the Eden-Tamir Duo were instrumental in molding today’s approach to the artistry of duo pianism; their contribution to expanding duo repertoire was remarkable. Inter alia, they were responsible for introducing Lutoslawski’s Paganini Variations and, at the suggestion of Stravinsky, were the first to perform and record the two-piano version of “The Rite of Spring”.

The duo’s many prizes include “Grand Prix du Disque.”